Rego Park, NY -- (SBWIRE) -- 08/15/2013 -- With a goal of $20,000 the creators of the iQ View Wireless Charging Flip Cover for Samsung Galaxy S4 have launched a crowdfunding project on Indiegogo. Created by a company out of New York, New York by the name of Monster Watts the innovative charging device is the only interactive flip cover for a smartphone in the marketplace worldwide. Multitasking as a wireless charging receiver with an interactive quick view window cover, battery saver, screen protector and tough case the little item is an all around answer for discriminating Samsung consumers. Soon to have two color choices of either black or white, the product is NFC compatible with its wireless charging receiver integrated into the back cover. Additionally, the device works with any Qi compatible charging pad.

Saving energy the interactive window at the top of the iQ View turns on to show important information at a glance. Information like the signal and battery status, incoming messages, missed calls and the time and date. The cover also allows users to swipe the window to accept, reject or end calls while the battery draining display stays off. The utilitarian screen cover with the handy interactive window protects the smartphone from screen smudges and scratches as well. While the product automatically wakes up the S4 smartphone when it’s flipped open, it dually turns off the display when the cover is closed.

“Our advanced wireless technology uses a thin WiQiQi wireless charging receiver integrated into the back cover.” said Douglas Tam, Owner of Monster Watts. “So, the back cover of the iQ View replaces the original battery cover of the Samsung Galaxy S4. This allows the thin sleek design to be maintained and it allows the product to have excellent all around protection as well.” Funds raised for the iQ View wireless charging receiver will support bringing the flip covers into production. The item will retail in the United States for $50. To receive a WiQiQi Versa charging pad with an iQ View the items are priced together for $69 in the United States and $80 globally.

Monster Watts Inc. is an innovator of power accessories for Apple iPhones and Samsung Galaxy phones. Their design team is based in New York and they have factories in Asia to produce their highly functional products that are distributed worldwide. 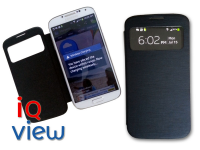 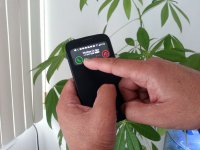 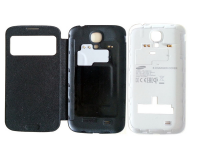