Englewood, NJ -- (SBWIRE) -- 02/28/2014 -- Founded in 2012, IroNova ™ is a French and US company that creates and develops innovative products. IroNova stands for innovation, technology, design and quality. "IRO" means "Color" in Japanese and “Nova” means “New” in Latin, it is also an uncommonly bright star.

Most of the people have no idea how many calories they burn during their daily lives.  Whatever the activity level "IRO" allows users to track their daily energy expenditure with the touch of a button. The "IRO" bracelet, with its 3D accelerometer sensor and powerful software, tracks the movements of users’ wrist on a continuous 100-hour basis and shows the corresponding color of the number of calories burned.

"IRO”, with both Bluetooth and USB interface, also allows users to share their "IRO" level and color on Facebook through its application, available on computers/laptops (Windows, Mac, Linux) and Smartphones/tablets (iOS and Android). Users can check their calorie consumption whenever they like through the "Your IRO" app, which saves results on a 6 month basis. 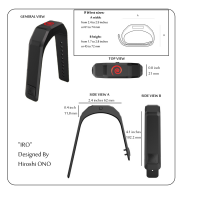