Islands in the Grass: Compelling New Book Shares Saga of One Man's Life

In his engrossing new book, author Arviss R. Stuart takes readers on the journey of one military man’s life. Upon his discharge from the Army, his last military assignment brings more than both he and the reader ever bargained for.

Elko, NV -- (SBWIRE) -- 12/04/2012 -- Many of those discharged from the Army return to civilian life with little to no hassle. However, as the protagonist in Arviss R. Stuart’s latest novel proves, voluntary discharge can easily mark the start of a wild and dangerous series of relationships.

‘Islands in the Grass’ exposes these relationships from one man’s viewpoint; how will he cope?

Synopsis:
“Steven Vincebt Sharpe requests discharge from the army. As a going away present, the army assigns him to accompany the body of a friend to his home for burial.

With his wife MaryAnn, Steve moves to the ranch which MaryAnn will inherit. Incidents in thier lives are broken at times as memories of war are recalled. The daughter suffers traumatic experiences as they grow.

The story is a saga of one man's life and his many relationships with others.”

“Less than two percent of all citizens have worn the uniform or have had a service member in their immediate family,” says Stuart.

Continuing, “This story, while completely fictional, is an attempt to cause the reader to reflect on those who serve.”

Critics are praising Stuart for his attempt to raise the positive profile of both serving military and veterans. As he explains, most are unaware of the tribulations and hardships the country’s military faces.

“People believe that someone can leave the Army and slot right back into civilian life. However, this sometimes isn’t the case. The things people see and do while serving can have a dramatic effect on their ability to reintegrate into society. I hope this book exposes some of those struggles and breeds compassion for people’s situations,” he concludes.

‘Islands in the Grass’, published by BookBaby, is available now from Amazon. And other ebook forms. 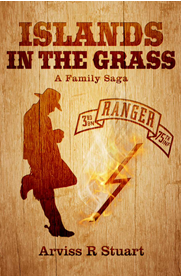