Masterfully conceived and crafted by Denise R. Stephenson, Isolation straddles fact and fiction to depict a new world where the human/bacteria equation of life and death shifts in a deadly direction. While of course a work of fiction, Stephenson’s narrative was inspired by the real-world epidemic of antibiotic resistance.

Oceanside, CA -- (SBWIRE) -- 05/06/2014 -- Oceanside, CA – Everybody knows the drill; a quick squirt of hand sanitizer a few times a day is the panacea of all ills. However, in Denise R. Stephenson's chilling and thought-provoking new dystopian novel, these simple struggles against nature are placed in the hands of a malevolent government. The very bacteria meant to be washed away, now threatens to destroy humanity.

A bleak future plays out in Isolation, which examines what happens when antibiotic resistance becomes too much for humans to control.

Imagine: You can’t touch your face. You can’t leave your home. You don’t dare get sick, that would lead to removal and, likely, death.

In Isolation, fear of contagion reaches a fever pitch as a bacterial epidemic catapults the US into an apocalyptic crisis. Mothers like Maggie bind their infants’ hands, terrified they might slip fingers into mouths. Touch is outlawed. Gary, a Sterilizer, uses robots to scour the infected, avoiding all contact with human flesh. Trevor, the Chief Enforcer, watches, eager to report any and all infractions.

One inadvertent touch will change all of their lives.

“This may be fiction, but the premise of my narrative was inspired by the grave danger we’re putting ourselves in with our overuse of antibiotics, not only to remedy human illness but also to treat the animals we use as our food supply. Repeatedly we learn of yet another food source, plant or animal, which has become tainted and deadly. This is only the beginning,” says Stephenson, a prolific writer.

According to Stephenson, “We need to hang onto friendly bacteria, but the balance of good and bad bacteria could easily shift out of our favor. My book looks at what happens when uncontrolled bacteria literally take over the country. The World Health Organization urges the development new antibiotics to prevent us from entering the post-antibiotic age where simple bacterial infections will again be killers. If people can’t imagine the possible future from the WHO’s urgent message, I hope my book will immerse people in the terror life could become!”

To date, the novel has garnered rave reviews.

“Almost daily I see news flashes about drug resistant strains of illnesses alongside that of government and corporate overreach into individual privacy. All of these seemingly minor and unconnected events gain momentum and meaning in Denise Stephenson's first novel, Isolation. More than a dystopian novel this story is a disturbing but enlightening journey into a future that we may be unwittingly and incrementally creating,” says Mary Kremer.

Bob Mayberry adds, “Stephenson's dystopia is at once frightening and tender, evoking our fears of unknown diseases and our human impulses to care for those who've been afflicted. She makes it all seem so plausible, so real, and nearly inevitable. A brilliant book, a great read.”

Isolation, published by Mill City Press, is available now: http://amzn.to/1kqPEAr. Electronic formats will be released by early June of 2014.

About Denise R. Stephenson
Denise R. Stephenson resides in Oceanside, CA, but she has lived in all the remote locales of her first novel, Isolation. Staying inside of boxes, forms, and genres has never been her strength. She's published over 20 academic articles and book chapters, many of which stray from traditional conventions. As a member of Attention Deficit Drama, she has written and produced monologs and short plays. She hopes to one day see on stage, Hibakusha, her most recent play about nuclear disasters. Stephenson is a book artist as well as a writer and has had her letterpress book What She Said in several national shows. 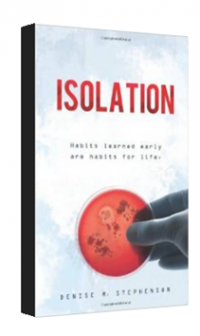