Sandro Del Rosario is an Italian artist that presently resides in the United States. Sandro is looking to raise $13,000 through Kickstarter for his upcoming animated film Lo Sguardo Italiano.

Matawan, NJ -- (SBWIRE) -- 10/27/2014 -- US based Italian artist Sandro Del Rosario has just launched a Kickstarter campaign with the funding target of $13,000. This crowdfunding campaign will assist Sandro complete his upcoming, animated short film titled Lo Sguardo Italiano. Sandro’s work as an artist has always been influenced strongly by places, his own feelings, and memories. "Lo Sguardo Italiano" promises to be a great film for people that love Italy, all Italians living abroad, and all the emigrants that have been the part of a similar journey.

As a filmmaker, Sandro is looking to showcase his love for arts, traditions, and the rich Italian cultural heritage through his film. The film also focuses on the desolated political, economical and social life in contemporary Italy. Through his viewpoint, Sandro plans to show how the present scenario in Italy interacts with a person having creative qualities.

Being an experimental animation artist, Sandro wishes to explore new animation techniques and mixed media to make films that offer a unique look and feel. "Lo Sguardo Italiano" is a result of Sandro’s creative research in animation. The main body of the film will comprise of thousands of photos hand painted by oil pastel. Made from approximately 6,000 images, the film will have the duration of ten minutes.

Until now, "Lo Sguardo Italiano" has been a one man show with Sandro himself working as the director, the main producer, and animator for the film. Sandro personally believes that his style of work as an artist makes it difficult to collaborate with others. However, he is still looking to hire a sound designer and a composer because sound design is a big part of his work.

The funding budget of 13,000 will help Sandro manage the following expenses.
- Six months of full-time work on the images and the shooting of the film.
- Hiring a sound designer to work with the director on the sound track.
- Payment of composer fee.
- Post-production expenses (sound mix, final DCP - Digital Cinema Package - preparation, DVD and Blu Rays, collateral material.

To find out more about this Kickstarter campaign, please visit http://kck.st/1EVnD1h

About Sandro Del Rosario
Sandro’s work is inspired by places, feelings and memories of feelings, distilled through a labor intense process that transforms still images, photos, paintings and collages in moving, imaginary spaces. His work has been awarded and exhibited worldwide. 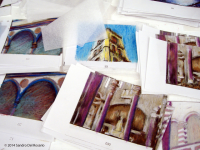