Tampa, FL -- (SBWIRE) -- 11/08/2013 -- While John and Jane Doe were blinded like a deer in headlights by the latest scandal breaking between Olivia, Fitz and Jake; and the beloved politicians were focusing on scoring political points … millions of restaurateurs, realtors, and aspiring gov’t subcontractors were dealt a near fatal blow during 17 tumultuous days in October.

After the dust settled and Congress kissed and made up (temporarily),entrepreneurs were left battered and bruised like a prize fighter clinging to the ropes in the 12th.

While the back bone of the economy “small businesses” were responsible for creating 2 out of every 3 jobs during our recovery, the Gov’t shutdown sent aspiring entrepreneurs scrambling to family, friends and suppliers to finance lucrative contracts and opportunities many fought years to lock down.

Caught between a rock and a hard place many found themselves robbing Peter to make Payroll, shutting down their offices, and laying off groups of valuable employees.

For scores of entrepreneurs across the nation, the Gov’t shutdown could not have occurred at a worst time, as October is the busiest borrowing time of the year. From Pittsburg to the Pan Handle and the Hamptons to Hollywood entrepreneurs sought funding to purchase inventory for the upcoming Christmas season, and carry receivables from government agencies year end buying spree which wrapped up September 31st.

In total, nearly $100 million a day in SBA lending was stalled due to the closure of the Small Business Administration loan approval and processing offices. Many seeking traditional bank financing were also up a creek without a paddle, as billions in funding were put on hold as the closure of the Internal Revenue Service prevented conventional business lenders from verifying the accuracy of historical tax returns filed by small business owners.

Now that the government is fully functioning again ( at least for the next 45 days ), it’s critical that small businesses expedite their funding in order to end the year on a high note and deliver on opportunities they worked months and years to win. Can one imagine the devastation of not being able to win the funding to deliver on a huge Wal-Mart Christmas order?

In order to accelerate the small business lending and avoid the funding grid lock; here’s three amazing tips that will give any business owner an unfair advantage over competitors also trying to convince bankers to take them serious and quickly fund their loan request.

1.) Bank Where one is Celebrated Not Tolerated

Prior to blasting the tax returns, personal credit report, and life story to every banker in a five mile radius of one’s office, It is highly suggested to turn to Mr. Google and searching for niche lenders that specialize in lending to one particular industry. For those who are not sure where to turn, they must try to ask their national association which specialty lenders sponsor booths at their annual trade shows?

Once one is able to identify lenders that cater to his specific niche, he will quickly find himrself receiving the red carpet treatment vs. being red flagged.

2.) Taking them to The Bridge

Similar to the famous lyrics bellowed out by James Brown in his hit song Get UP!, When time is of essence and the window of opportunity ( WOO ) is closing in, it is recommended to take them to the bridge. This means to locate national and local lenders who specialize in funding bridge loans.

While a bit pricier than traditional business loans, bridge or interim lenders can shave weeks and months off a lengthy loan approval process.

Over the past few years a plethora of bridge lenders such as Wing Finance, On Deck Capital and World Business Lenders have been a godsend for countless entrepreneurs who required short term money to keep their deal alive.

In the debut book It’s Money In The Bank: 7 Insider Tips To Financing Any Small Biz! Edward E. Felder, Jr lets the cat out the bag by telling entrepreneurs that all banks aren’t created equal.

Well actually it is big surprise! While there are hundreds of SBA lenders claiming to fund start-ups, hotels, restaurants and other non-traditional businesses, there are many SBA funders simply follow a rigorous underwriting criteria that all but rules out everyone except for doctors, lawyers and real estate secured projects.

If one absolutely have to go the SBA route to close on his funding, it is highly recommended to do research, and begin an immediate dialogue with Non-Bank SBA Lenders.

Many of the estimated 14 non-bank SBA Lenders, fund deals most other SBA lenders wouldn’t give the time of day. Furthermore, many Non-Bank SBA lenders have less red tape and move with a far greater sense of urgency than most local SBA lenders.

If time is of essence and one need to close a deal that doesn’t necessarily fit into the “proverbial box”, outfits such as 44 Business Capital, Hana Small Business Lending and Newtek Small Business Finance might just be what the doctor ordered.

About Funding Guy,
Edward E. Felder, Jr (http://www.thefundingguy.com). MBA aka The Funding Guy is a 20 year lending executive and author of several books including: “It’s Money In the Bank: 7 Insider Tips To Financing Any Small Biz!” To obtain other tips on fast tracking your funding or to listen to an amazing rendition of his audio book, people are invited to tour www.TheFundingGuy.com. 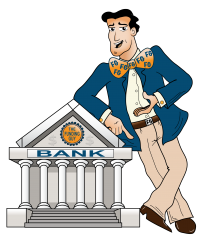