When her son was diagnosed with Autism Spectrum Disorder, Diane Mayer Christiansen experienced problems trying to start a dialogue about the condition. Now, through a witty yet frankly honest book of experiences, Christiansen is engaging parents and children across the country, proving that ‘being different’ is no bar to being cool.

Glenview, IL -- (SBWIRE) -- 11/14/2012 -- When discussing the characteristics and life of someone with Autism, few child-related resources actually exist. However, thanks to one Mother’s initiative and desire for open dialogue, a new and compelling book has finally hit the market.

‘Jackie’s Journal’, co-authored by Diane Mayer Christiansen, was initially written as an attempt to speak to her son through the written word. However, following its recent publication, the book is now becoming a vital text in classrooms everywhere.

“In this real-life story told from the point of view of a child with autism spectrum disorder (ASD), Jackie Christiansen describes the unique differences that make him who he is while also explaining how he is still similar to the other kids his age.

Jackie discusses the challenges he faces living with the disorder, how he struggles with social cues and sensory and personal-space issues and can occasionally become very loud or animated for no apparent reason. However, Jackie chooses to celebrate the aspects that make him unique, and this journal is a great kid-friendly prompt for starting conversations about ASD and helping others relate to children with the disorder.”

As the author explains, there was an urgent need for a book of this nature.

“When Jackie was diagnosed, we couldn’t come up with an easy way to begin the conversation with him and our extended network. Being a writer, I decided to use the tools that I knew and speak to my son through the written word. Jackie's Journal was born,” Christiansen explains.

She continues, “In fact, he is the real author the book and drew all of the illustrations and comic strips himself. I just took his words and put them into a relatable form. It’s full of tongue-in-cheek humour and downright silliness.”

However, while often humorous, the book contains a very serious message. Detailed through a number of hurtful and frustrating experiences, the real tribulations and challenges of ASD are brought to light.

Written particularly with younger audiences in mind, Christiansen hopes that ‘Jackie’s Journal’ will help young readers accept those who are different from them.

“The book is perfect for third through sixth-graders, as well as for all classrooms that are looking to start a conversation about Autism, spectrum disorders or just about anything else that makes certain people ‘different’. It’s a great tool to teach children tolerance and acceptance; something which will stick with them throughout life,” she adds.

In short, the journal is a celebration of one boy who, more than anything, wants to make autism cool!

‘Jackie’s Journal’, published by Black Hawk Publishing, is available for purchase from the book’s official website: http://www.jackiejournal.com/ as well as Barnes & Noble Booksellers and Amazon.com

About the Authors
Jackie Christiansen is a nine-year-old boy with autism spectrum disorder who enjoys fishing, chess, and collecting toy cars. He expresses his differences through his writing so that other children his age can learn ASD.

Diane Mayer Christiansen is a former laboratory manager at Northwestern University where she was involved in genetic research for the department of biochemistry, molecular biology, and cell biology. She is now a stay-at-home mom and writer. She is the author of Secrets of Woodcrest: Escape from Levitius and Switcher. They both live in Glenview, Illinois. 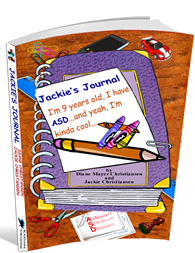