James McCullum brings to the stage talent, experience, inspiration, and music that are patented by a true Artist of the true 'Rock' era!

Los Angeles, CA -- (SBWIRE) -- 08/07/2012 -- James McCullum is “The real deal”! An experienced, seasoned musician, bringing with his resume many years of hands on experience as a Sound Engineer and Music Guru known for his power house rock band, the James McCullum project, James has patented his original sound from the ages of yester-year when Rock music hand-paved with blood, sweat, and tears its original sound and made itself what we have come to know as the heart-pounding, adrenaline-pumping music we now call true Rock!

James has traveled across the world cultivating his talents opening shows for some of the biggest names in Rock Music from the eighties and nineties, bands that have touched our hearts and minds, leaving audiences with an understanding, the knowledge of what true Rock music sounds like. These Rock Bands got us through the tough times and the good times, and created lasting memories marking our lives and time in history.Bands such as Journey, Morris Day and The Time, Graham Central Station, War, Edgar Winter, and the Marshall Tucker Band are but a few that James has worked with and learned from, setting his stage with that pure heart-amping, adrenaline-surging sound now known as cutting sledge Rock!

As a Songwriter, James interweaves subtle rhymes in his lyrics, and here and there just a touch of Funk on his cutting sledge power, designing lyrical masterpieces that, once heard, can only be identified as the one and only Cutting sledge sound of James McCullum and The James McCullum Project. James observes the subtleties of everyday survival for everyday people in various diverse environments, then envisions, materializes, and refines them into Music Works of Art people of all ages will be identifying with and Rockin' to for decades to come.

For the last several years, James has been working on that one CD, Unchartered Territory”, that will “Rock Your World, if you let me”. Like every “REAL” Artist working towards that one project that stands alone for all time and has his personal signature on it, James has captured that sound, Cutting Sledge Rock, and has created the CD, “Unchartered Territory”, which he can be proud of for all time. 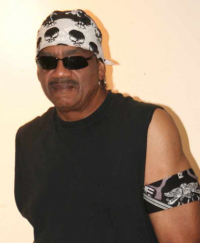