New York City, NY -- (SBWIRE) -- 03/29/2012 -- Did you know that one of the worse civil rights violations in America is still misunderstood, overlooked, and undervalued? Seventy years later, books about American concentration camps continue to be taboo; especially in the fiction sector. Now one could argue that Snow Falling Over Cedars, Hotel on the Corner of Bitter and Sweet, When the Emperor was Divine, and Thin Wood Walls have cracked that taboo. To some extent, yes. Even though Cedars and Hotel interpretations face the issues of racism and the harsh reality of the imprisonment camps, but they are not told solely in the experiences of the Japanese-American community. And although Emperor and Walls do shed light on the historical experiences, however they don’t dig down into the emotional depth of enduring the hardships. The novels do contend with broken-down families, but do not explore the rampant distrust and prejudices within the Nikkon community, nor the sporadic violence and derogatory language that erupted during the internment years.

Eyes Behind Belligerence unravels the challenges between two unlikely Nisei friends, Jim and Russell, into adulthood during the Second World War. As restrictions are imposed, (even in the safe, rural community of Bainbridge Island,) as harassments escalate, (including the FBI invading their homes and deporting their fathers to Montana for espionage trials,) the fated day arrives: evacuation of all Japanese civilians. Rounded up like cattle, tagged, they are hauled to the fringes of Death Valley: Manzanar. Together they must survive racism, gang violence, and the harsh elements of the environment. Together they must prove their loyalty, especially after a tragic riot on the eve of Pearl Harbor's anniversary. While Russell enlists in a segregated army, becoming part of one the most decorated units in US history, Jim is sent to a different camp for the "No-No" boys: those who are marked disloyal. Removed from their families, they are forced to reevaluate their identities and discover, most importantly, what it means to forgive.

This is K.P Kollenborn’s debut novel. Her passion in both history and story-telling are strong, enduring, and poignant. She has spent 20 years researching and writing this project to incorporate historical accuracies as well as artistic endeavors. Her philosophy is this: “Submitting to a moment in time allows us to remember, or to muse even, over our society’s past. Although writing can educate as well as entertain, yet what makes art incredibly amazing, to that of paintings, photographs, and music, it transposes emotion into another form of humanity, and therefore, it is our humanity which keeps all of us striving for an improved future.”

Eyes Behind Belligerence is self published and you can read experts at either http://kpkollenborn.com/book.htm or http://www.EyesBehindBelligerence.com. You can also purchase eBook copies at http://www.Amazon.com, http://www.GoodReads.com, or Smashwords.com for a limited time for only 99 cents; and can purchase soft cover on CreateSpace for $18.00. 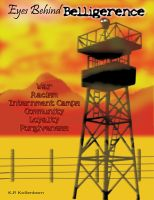