Others, like Gil Scott-Heron, Mark Murphy and legions of rappers, have recognized the power of the almighty Word. Some have been hip, some sung, some said, but none have the musical import and impact of Tony Adamo’s artistry.

Orlando, FL -- (SBWIRE) -- 03/01/2013 -- Tony Adamo has essentially created a new genre: “HipSpokenWord.” His inventions are certainly hip and relevant; they are mostly spoken, though occasionally sung; and the words are extremely powerful and relevant. With the assistance of Producer Mike Clark, one of the most renowned Jazz/Funk drummers to ever wield sticks, Tony has concocted a topical masterpiece in “Miles of Blu.”

Tony’s hipster persona belies his intriguing background. Born in San Francisco, he has performed a myriad of tasks in the entertainment industry: He has been an actor, a DJ, a voice over artist, a rock singer and a Hollywood agent. His stint as an explosives handler at Naval and Marine bases, including a voluntary deployment to the Middle East during the first Gulf War, provided creative fodder for many of his compositions. After connecting with members of the venerated funk machine Tower of Power, Tony developed his unique contribution to culture, the hip-spoken-word style that is all his own.

His methods have been featured previously on his own albums, including “When Love Comes Over You,” “Dance of Love,” “Straight-Up Deal,” and “What Is Hip?” While all have been a groove, with players like the TOP Horns, The Headhunters and Jazz greats Eddie Henderson, Steve Gadd, Ernie Watts and Neil Larsen on-board, his new release, “Miles of Blu,” is the culmination of years of musical experimentation and execution. Opening with a tribute to the hardest working man (ever) in show biz, “JB” jump-starts the affair with funkified horns and Tony’s urging to have a “funky good time.” As with all the tracks, this is thoughtful, well-executed music played by incredible players.

The burning swinger “Miles of Blu” is up next. Tony sets the evocative mood, as he places the listener smack-dab in the midst of an urban jazz club. Tim Ouimette’s trumpet echoes miles of smiles as Tony calls out his tribute to the dark prince of Jazz. A bass-less tune, based on a ‘round midnight vibe…The Bay Area is our next stop: Adamo’s roll call of B-3 Bombers tells it like it is on “Funkin’ at the Chickn’ Shack” and, somewhere, Jimmy Smith grins.

On the topical “America R We Free” Tony tells a potentially patriotic tale of a country divided. The former bomb handler knows of what he speaks – “…on the backs of the middle-class and poor.” All respect; all truth; all the time. Power to the people!!! Stand Up and Get UP! This is a thinking man’s rap, and this revolution might be televised.

Next, Tony lays out a barbecue (“BBQ”) as he performs a real backyard rap and introduces the band. All are bumping, but under and behind it all, Mike Clark stokes the beat, allowing the cats to ride on top. You can taste the beer, feel the grease…Richie Goods sets up the low-down vamp of “The Power of Funky Madness”; Danny Draher sings the blues on his six-string; Tony tells it like it is, and will be…

Some Tower of Power East Bay grease slides our way next. The leader speaks truth again, urging us to inoculate our souls as his stream-of-consciousness glides across the syncopated snare snaps from Clark’s tubs. “Soul Vaccination” all across the nation! Another TOP hit changes things up, as Adamo and crew shuffle off like stallions through the middle of a stream. Heed his advice: “Don’t Change Horses” unless you dare encounter Steve Homan’s bluesy guitar, Delbert Bump’s slick B-3 riffs and Rob Dixon’s phat tenor tones.

The father of Hip/Spoken/Word pays further homage to the Godfather of Soul as he asks the perennial question “Ain't That a Groove?” Word: Yes! It can’t but BE a groove under the tightly controlled flails of drummer/producer Clark, keyboardist/mixer Gary Mielke’s bass lines and Bill Summers’ slashing percussion discussion. Ouimette talks some talk on the bone; Adamo demands an answer – Ain't that?

“Jack Kerouac, Jack!” was one of THE original hipsters. Obviously a predecessor of Maestro Adamo, this beat recognizes the contributions of the first Beats. Rob Dixon’s plaintive tenor moans over the proceedings, and, once again, a silenced voice is suddenly New-Jack as the writer is on the road again, now married to the names of Jazz greats also long-gone. After such a road trip, it’s time to blast off with “Sun-Ra Rockets to Mars” – This science fiction is for real. There has never been a hipper trip: Space is the place! Clark tips as Ouimette sizzles on top, Harmon mute firmly in-place. The girls sing us back to Earth, but we’re better for the journey. Herman Poole Blount, nee Le Sony’r Ra, would heavily dig this excursion…

After all the ‘que, miles of blu, shuffling horses, et al, there ain't nothin’ left but to ask “What Is Hip?” Tony Adamo knows, and it shows. He adheres to the original sacred text, but in HIS way. Speaking the well-crafted lyrics actually adds a layer to meaning, making us all ponder the age-old query. As Tony knows, sometimes it’s more important to know what’s not hip, too. As on the TOP original, the horns keep shouting and the organ keeps bumpin’ – That’s Delbert Bump.

Mike Clark’s musical life story is next: “The Other Side of Time” is “Like a heavyweight boxer throwin’ down.” Clark is one tough-but-sensitive, rough-and-polished player, an acknowledged innovator on his chosen voice, the trap set. Mike’s longtime cohort, Michael Wolff, adds to the mix with his modern pianistic stylings. Tony’s tip of the hat to his producer, friend, drummer and partner in crime is on the one – As is the drummer’s heartfelt tag to his contemporaries.

The philosophizing old “Tickn’ Clock” takes us home. Tony’s sing/song speaks of times now and of those to come, as “we step away from our past, and into our future…” Tony’s time is NOW, and with “Miles of Blu” he shows us the path to take. 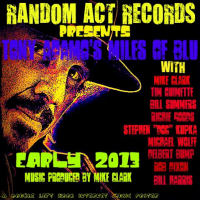