Patients ask their alternative medical providers this question day in and day out. Good question. The truth is, if it isn't about dispensing pharmaceutical drugs or surgery, the odds are high that your well-educated, well-meaning physician is completely unaware of it.

So where does that leave a patient, looking for health care, not sick care?

The new film “Undoctored” starts with the tagline, “What your doctor didn't learn in medical school, and why…

“We believe that Undoctored will be the most important film in the history of alternative medicine,” said the film’s producer, Jeff Hays. With the success of the film’s predecessor “Doctored”, a movie about the monopolistic nature of industrialized medicine for profit, at the expense of people’s health - the most successful film in its genre - the producer focuses his new project on what to do about it now. “We need supporters for our Indiegogo fundraising campaign to help complete this much needed film. It affects all of us, as eighty percent of our population will die of mostly avoidable chronic diseases. The medical field regularly pushes the use of drugs and surgery first, to cover the symptom, while often ignoring the cause. We've found that not only is that unnecessary much of the time, but we are also now seeing it often does more harm than good to your body, as well as your wallet. But it is the profit model the industry relies on, so it trumps your health. We need the public’s support to get the message out.”

The producer believes that runaway healthcare costs and a sick population are forcing new options to be considered and recognized for the country’s future. He implores that these considerations be taken despite the powerful lobbying and advertising firms that hold the attention of the medical establishment. Once again the common man has to stand up and be accounted for in order to bring about change, for the better.

Hays’ plans include the completion of the film in at least a rough cut version by September. This will allow him to submit the film to the Sundance Film Festival, with hopes of release at the festival in Park City, Utah in January. “Normally I would avoid the film festival circuit but this is a controversial film that needs to be seen. I think Sundance will be the best launching pad for this project”, added Hays.

The film’s total budget is $700,000 and the present crowdfunding goal is $100,000. With investors to fill in the much needed funds if needs be to make the film happen, Hays is asking for the support of the common man that the film will ultimately help. He hopes that it will bring awareness and new information that will hopefully save lives, help bring about real health and perhaps even affect legislation. “If you support drug-free healing as a first option, you’re going to love Undoctored”, says Hays. 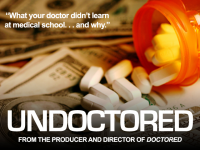