What is the power of music? Many may feel that music entertains people. It gives them a chance to revel and dance. It adds life to a party. The melodious beats of the various musical instruments have a relaxing effect on people. It can calm you down and it can help you forget everything else that burdens you for a while. Have you ever caught yourself humming the lyrics to a song without even realizing it? That is what music can do; and that is what Jeff James is well known for.

Mountain View, CA -- (SBWIRE) -- 04/17/2013 -- Jeffrey James is Hawaiian artist with Filipino roots. His father is Chuck James who is also the owner of one of the most popular music schools in Hawaii, ‘Chuck James Music School’ which has 3 more branches. He is a music instructor at this school and is considered as one of the best as he graduated at Hawaii Pacific University on a 100% music scholarship,.

In 2009, Jeff James took a step further and formed his own music band called TTYM, which is short for Talk To You Music. This band does not stick to just one music genre. They use R&B, Soul and Reggae to bring life into their music. Jeff James has won a lot of praise and appreciation from his fans.

“Jeff James is an iconic Hawaiian musician. His music communicates with the listeners and that, I think, is an amazing quality that every musician must possess.”

Without any support from the leading label companies, ‘Hawaiian girls’, his first single went on to top the music charts. It was on the # 1 position for weeks together. This feat clearly speaks of the artist’s potential. In the year 2011, this song won the Na Hoku Hanohano award which is considered as a very prestigious award in the Hawaiian music community.

The biggest battle of the bands in Hawaii called the "MaiTai rumble" was won by Jeff James’s band TTYM this year and they won a staggering $14,000 cash prize to give their musical career a lift.

To anyone who was yet not aware of this fantastic musical masterpiece, the Battle of the Bands was the answer. Some of his well known songs that topped music charts are , “Hawaiian Girls”, “ Good”, “ Love me”, “Let’s Not Pretend” and many more. Since then he had been working with known personalities in US and Hawaii such as American idols Jasmine Trias and Cammille Velasco.

In 2013, he won the Top Brand Awards Philippines Most Promising International Male Singer Performer of The Year by People’s Choice Award for his songs, “Let’s Not Pretend” and “Hawaiian girls”. He is set to launch his latest album ,” Just be Yourself”  by Jeff James and TTYM which will be released in May 2013.

On May 27, 2013 , We can all enjoy an international music perfomed by an award winning artist. “An Evening with Jeff James Philippines Tour 2013” produced by Rob Wilson Productions, 8pm, at Bagaberde 101 CCP complex Pasay City. Jeff James will capture our hearts and show us that he is really a Filipino Pride. So get ready and let your love for music take over you. 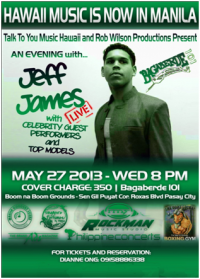