Newlywed Mrs. Sarah Partouche (née Ross) is Shoulder to Shoulder with Her Husband Levi in establishing an essential presence to Jews in Montpellier.

Matawan, NJ -- (SBWIRE) -- 05/13/2016 -- For as long as she can remember, even hearkening back to being a toddler, Matawan native Sarah Ross helped her brother Mendy and her mom and dad Aaron and Devorah reach out and help fellow Jews in the area. She has worked for several Jewish leaders engaging in outreach, doing Hebrew School, planning programs and running camps in support of Jewish communities near and far.

After her recent wedding, Sarah cultivated a finer appreciation for the word far. That's because she and her husband, Rabbi Levi Partocuhe relocated to Montpellier in the south of France to establish a Chabad presence to support Jewish needs and interests in this thriving city.

Montpellier is located in the Languedoc-Roussillon region in the South of France along the Mediterranean Sea, close to Spain. It is the third-largest French city on the Mediterranean coast after Marseille and Nice. Montpellier is the 8th largest city of France, and is also the fastest growing city in the country over the past 25 years. Nearly one third of the population is comprised of students from three universities and three higher education institutions that are outside the university framework in the city. It is believed that about 20,000 of these students are Jewish.

Chabad endeavors to create a Jewish presence on campus, and will serve Montpellier's tourists every summer to keep Jews connected even while away on vacation or attending classes.

From Matawan to Montpellier, Sarah's commitment to contributing and helping her community is as strong as ever.

Her husband, Rabbi Levi Partouche is cut from the same cloth. Levi, a native of Montpellier, France and the son of Rabbi Peretz and Georgette Partouche, was also involved in community outreach by assisting his parents. His passion for helping others has led him across the globe to far-flung destinations including South Korea, Venice, Prague and Switzerland. Levi became an ordained Rabbi in 2014 and hopes to put his knowledge, experience and love of life and Jews to good use by leading Chabad of Southwest Montpellier. Chabad of Southwest Montpellier is the Center for Jewish Life for students and families. They provide a wide array of programs aimed to connect people to their heritage and roots, no matter their affiliation or level of observance.

A crowdfunding campaign is underway to help Rabbi Levi Partouche and his wife Sarah expand their center for Jewish life for Jews visiting or living in Montpellier. With a modest funding goal of $20,000 they plan to expand programs and services designed to make every Jew feel at home whether they are a student, a tourist or a professional in town for meetings. 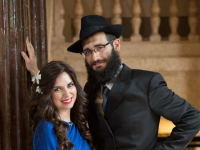