Los Angeles, CA -- (SBWIRE) -- 07/17/2014 -- Major motion pictures are seldom seen in the crowdfunding world and with good reason; the established Hollywood standards of movie production follow time-honored steps including making decisions by committee. But when you’re dealing with a huge subject like ALIENS, HARVARD and an esteemed Psychiatry Professor who sacrificed everything to champion people who claimed to be ABDUCTED BY ALIENS, the integrity and authenticity of the story is paramount.

Independent producer Denise David Williams and her team walked away from some high-profile Hollywood partners in order to stay true to the work and life of DR. JOHN MACK and are seeking crowdfunding to develop the screenplay for JOHN MACK: The Movie.

Every movie begins with a screenplay. The funds being sought - just a small portion of the final productions budget - will enable the production team to hire a writer of the highest caliber and also cover essential development costs to make the screenplay happen. Several A-list screenwriters that are well known to the movie-going public are willing to work for less than their usual rate because they have a personal passion for the JOHN MACK story and a belief in the dramatic and commercial potential of this film. Once the screenplay is complete, the film can then be fully financed by a studio. They need help taking this first crucial step.

Who is John Mack and why make a major motion picture about him?

DR. JOHN MACK was a Harvard psychiatry professor and Pulitzer Prize-winning author who was asked to study people who claimed to be abducted by aliens. As a man of science, he was reluctant, but these people were desperate for help, and Dr. Mack was curious what the underlying psychiatric syndrome might be.

Dr. Mack studied over 200 alien abductees using everything he had as a world-class psychiartrist. His conclusions shocked him: “These people are not lying and they are not crazy. I know mental illness, and this is not mental illness.” he announced in his best-selling book, Abduction.

Headlines around the world mocked him. His friends and colleagues, even his wife, thought he had lost his mind. Harvard Medical School was mortified that their Head of Psychiatry was on national television saying that aliens may be real. A secret committee was formed to discredit Dr. Mack – to ruin his reputation and take away his tenure. But in spite of enduring ridicule and rejection, John Mack continued to champion the abductees until his death.

JOHN MACK: The Movie will tell his incredible story of courage, conviction and personal transformation in the face of the ALIEN phenomenon.

JOHN MACK: The Movie is sure to spark a sincere dialogue about the real possibility that we are not alone in the UNIVERSE. The public is hungry to have this huge conversation. It is time to bring it into the mainstream. We urge you to highlight this story. John Mack had great courage in doing this work, we ask that you have the same. 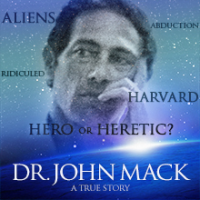