Bad Axe, MI -- (SBWIRE) -- 10/24/2012 -- Award-winning Songwriter Johnny Prill, Bad Axe, MI just released a song titled I Saw America Today. The song honors and thanks our nation’s veterans for giving us the freedom to see the beauty of America every day.

Veterans Day annually falls on November 11. This year, Veterans Day falls on a Sunday, so Monday, the 12th of November, is considered a federal holiday. This day is the anniversary of the signing of the armistice, which ended World War I.

“It is important to honor all who served; because of them, we can enjoy a better way of life,” said Prill. “As I wrote the song, I thought about the freedom that we all have as Americans. I also thought about our military personal who put their lives on the line every day, so we can enjoy that freedom.”

Prill’s father, John, and late father-in law, Ernest Reinke, both served during the Korean War, and his son-in-law, Joseph Ordus, served in Operation Iraqi Freedom. He lost a first cousin, Elmer Kivel, in the Vietnam War. “It makes me proud to honor them and all the men and women who have served the United States through their military service. May God bless them and always watch over them,” Prill stated.

United States Senator Carl Levin, who is currently the chairman of the Armed Services Committee, wrote Prill stating: “Thank you for sending me the song I Saw America Today you wrote honoring our nation's veterans. I found the lyrics interesting, and I appreciate you keeping me in mind.  I share your views about the importance of honoring those who served in our nation's military.”

State Senator Mike Green, Michigan, told Prill: “Thank you for sharing your song, I Saw America Today. Your song reflects the best of the American spirit and is an honor to those men and women who have made it the greatest nation in the world. I found it inspiring and uplifting. Please know of my appreciation and best wishes for success in your future endeavors.”

I Saw America Today is currently being added to military and veteran radio programs across the country.

You can read the lyrics and listen to I Saw America Today at Prill’s website: http://www.nationalgrandparentsday.com/ISawAmericaToday.html

I Saw America Today can also be viewed on YouTube: http://www.youtube.com/watch?v=jwwHfiu5WGY

Photo caption:
Johnny Prill proudly displays a photo of his father, John, a Korean War Veteran, in front of the Huron County Veterans Memorial. Prill’s song I Saw America Today honors our nation’s veterans for their service and dedication.

About Johnny Prill
Johnny Prill is the writer of the official song of National Grandparents Day A Song for Grandma and Grandpa. A number of his songs have been recorded by Bobby Vinton, who calls Prill “one of the most creative songwriters of our time.” His songs have been featured in various publications, including Country Weekly, The Detroit News, The Detroit Free Press and The Las Vegas Weekly. 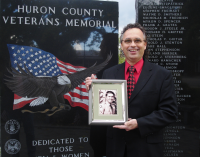