NBA’s Trevor Booker and Josh Howard are bringing their 5K winner take all 5 on 5 basketball tournament back to Mauldin, SC.

Mauldin, SC -- (SBWIRE) -- 06/05/2012 -- The city of Mauldin, SC is preparing for yet another unforgettable weekend as NBA star's Trevor Booker and Josh Howard host their 2nd annual Tru Ballers 5 on 5 basketball tournament. Sparking a buzz thought-out the nation, teams from South Carolina, North Carolina, Georgia, Virginia, DC, Maryland, Kentucky, Florida, Texas, Mississippi, and other areas will be participating in this years’ event. The Tru-Ballers 5 on 5 Basketball Tournament will be held June 8-10 at the Mauldin Recreation Center.

Presented by Spinx, Tru-Ballers 5 on 5 Basketball Tournament emerged as a traditional event originating from Kevin Garret, and is now a collaborative effort carried on by Trevor Booker and The Josh Howard Foundation. Creating a competitive atmosphere with a double elimination each game, is like a playoff game because the “winner takes all” and in this instance $5,000. Proceeds raised during this eventful weekend will help build an “inclusive playground” at Sunset Park in Mauldin, for children with disabilities. 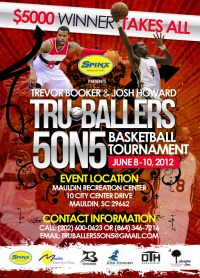