Chicago-born Josie has graced numerous magazine covers, has posed within the pages of Playboy, as well as sitting for a variety of "pin-up" artists and serving as the model for a number of popular video game characters.

Josie previously had a successful career as a celebrity make-up artist & wardrobe stylist, working on films, album covers and advertising campaigns. Josie has a popular line of clothing, costumes & rave wear, "Josie Loves J Valentine", which has already been nominated for several design & marketing awards and has proved to be a celeb favorite worn by stars like Nicki Minaj, Paris Hilton & Kendall Jenner.

Josie Loves J Valentine was released September 7th, 2011, on “Fashions Night Out” to a celebrity filled crowd at Playhouse Nightclub and featured an all-star band performing (including her husband Steve & Billy Idol) while a variety of reality stars, musicians & Playmates walked in her fashion show.

She is now expanding her brand with her new line of Josie Stevens by Jumpin Jammerz footed pajamas.

“In my Josie Loves J Valentine line, we have unique & fun club wear, costumes, street wear & bikinis that will take girls from day time to a night out, but I have gotten so many requests to design pajamas as well, with those same cute & fun design elements. I think the desire to look cute, fun & stylish doesn’t end when you get home, you still want to feel adorable in bed. No one wants to take off their hot outfit & put on boring pajamas, that’s no fun at all... So I thought about what I love to put on at home, and that is Jumpin Jammerz! I couldnt imagine doing a sleepwear collection with anyone else, because to me they are the only brand that brings the same spirit of fun & attention to detail to their designs that I love in my designs. It’s a perfect fit & we couldn’t be more excited about the line!

The thing I love best about Jumpin Jammerz is that they are so comfy & snuggly, made of the softest fabrics, and they really have thought of everything- the feet, the drop seat, the hood, the thumbholes, the iPod pocket. They are perfect for a relaxing day at home, sleeping, lounging, a pajama party,” stated Josie.

About Jumpin Jammerz ™
JumpinJammerz.com is the world's leading #1 company in footed sleepwear. They have the widest variety of prints, styles, fabrics, colors and options available to the consumer today. Jumpin Jammerz ismanufactured with the highest quality fabrics with fine detail to every footed pajama.

Jumpin’ Jammerz was conceived 15 years ago by entrepreneur and visionary Steve Pandi who originally set out to meet the needs of people looking for a unique and hard to find product, the adult footed pajama! For the past 15 years the company has been improving all their products to exceed the standards and wishes of their loyal client base. They have now sold over one million pairs of Jumpin Jammerz worldwide and are the top selling footed pajama company.

Their world famous Jammerz have been worn by an ever growing list of celebrity clients including seen on “The Ellen DeGeneres Show” where Ellen and Ryan Gosling and the entire audience wore Jumpin Jammerz! Most recently, Jumpin Jammerz has teamed up with KISS for unique collector’s items footies.

You can find the new Josie Stevens Jumpin Jammerz at:
http://www.jumpinjammerz.com 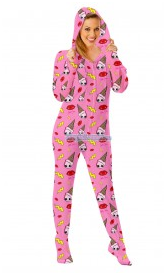 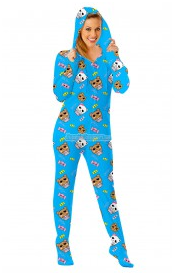