Written by H. Erroll Gelardin, ‘Journey of the Spirits: Time Has Stopped’ puts the spotlight on history’s true purpose, especially surrounding its mandate to protect religious interests. Calling on tales from historical pillars including the first Freemasons, Catherine De and Henry Le Beau, Gelardin’s raw and compelling novel dares to write about what others authors fear – the truth.

Beachwood, OH -- (SBWIRE) -- 03/17/2014 -- While most authors are happy to rock the boat, few dare to stray into literature’s uncharted waters. However, H. Erroll Gelardin won’t let anything step between his work and the truth – evident with the release of his new novel and the culmination of five years of diligent work.

‘Journey of the Spirits: Time Has Stopped’ fuses history, society and religion to prove that, while history is traditionally written by winners, time’s losers have an equally interesting story to tell.

You are now holding in your hands a book that I could define as an “anti-historical” SAGA novel. Our saga starts with Prophet Abraham, the Sumerian Prince, continues with a journey in history and ends with King Solomon sacrificing his new born baby to Ashtar.

This book, aims to create a question mark in the reader’s mind. Be prepared for a journey that contradicts what you have learned and where unwritten history battles with the written history.

As the author explains, his narrative leaves readers with plenty to think about.

“I examine many concepts and supposed truths that most people dare question. For example, is history’s primary purpose to protect religion, regardless of the truth? To this end, readers will revisit many of history’s key players to examine their actions in a way they never have before,” says Gelardin.

Continuing, “You will read about whom the first Free Masons were, who was An-Akh-Atton and who Moses was. You will also read about the Templars being partners with the Muslims Hashhashin and who the Hashashins were. I also talk about how Catherine De who had ordered to kill all of the Protestants and how Henry Le Beau the king of France killed Jean D’ Aumay with the Benediction of the Pope. These people have a bigger impact on history and the truth than most people know – and I’m the only writer to date to dare scrutinize their impact on history and history’s impact on how they are perceived.”

To date, the book has garnered a string of rave reviews.

For example, Gildor comments, “When I saw the book really I bought it for the cover But once I started to read it the book became more and more interesting ! The Author entered an era that I didn't know anything about. The era in which the hashashins made a deal with the crusaders! Also his explaining how was the paradise at the Alamut Fort was fantastic. I really recommend everyone to read this very interesting book.”

‘Journey of the Spirits: Time Has Stopped,’ published by Angel Eyes Publications, is available now: http://amzn.to/1l9aoi7.

About H. Erroll Gelardin
The author was born in Izmir Turkey in 1936 and in 1948 immigrated to Israel since then he lives there. He wrote 10 books in Turkish and all of them are in English and some into Russian, Chinese, Japanese, French and Spanish. This last book took 5 years of researches until he finished it. 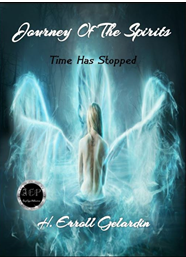