Eddie Star Returns With New Band And Album After Delay And Drama.

Sherman Oaks, CA -- (SBWIRE) -- 08/06/2015 -- A press conference was held at the downtown offices of MERG Digital in New York City. Members of the press and local media were on hand to capture the information on JoyBox's long awaited new album release. Punk Rocker Eddie Star, the band's founder, and lead singer, entered the room in full battle array. Decked out in vinyl and chains, Star walked through the door and jumped up on the table saying, "No pic's of me boy and girls, this time it is about the music". Right on queue, the music blazed up the room and a huge theater sized screen turned bright showing the cover of his new album. "Informal Deviance 13 Sexational Songs"

It got a roar from the members of the press. Star was handed a guitar, and proceeded to play Sexsation, the opening song from the album. Definitely worth the price of admission for this crazy gathering. Here is the 411 on the album:

On August 28th, Ton-Up, Inc. will release the long awaited debut album, titled Informal Deviance, from Eddie Star's new band JoyBox. With the album's release, it will bring to conclusion what has been a year and a half of delay and drama.

Momentum was building for the band after their 2013 appearance at artist William Quigley's New York art gala "The Pleasurist." Informal Deviance was scheduled for release in the fall of 2013. Industry heavy weight Roger Hampton took an interest and was able to assist the band with securing a slot on the Deftones tour.

At the last minute, Sony Music bought out their slot on the tour for an undisclosed amount. The promoter was kind enough to offer JoyBox first right of refusal.

"It really was devastating to lose that tour." says Star "But that is the business." Last year JoyBox was back in the studio and Star released a video for his song 2017 which featured guest appearances from his friend and former MTV VJ Jesse Camp, and Amanda Lepore. Tour dates in support of Informal Deviance will be announced shortly.

About Joybox
Joybox is a band formed by music veterans Eddie Star (Eddie Star & The Zero Effect) and Bob Mars (Tom Morello, Church of Mars, Invisible Humans). They decided to start a group that was bare and unrefined in the style of early acts like the Ramones and Iggy Pop and the Stooges.

About Ton-Up, Inc.
Ton-Up is an independent entertainment company. We draw inspiration from the biker and rocker subculture that developed in Britain during 1950's. We celebrate the individuality of the Rockers.

Doing a "Ton" meant that you were going 100mph or over on your motorcycle. 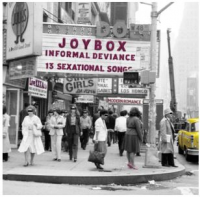