Written by Mark Rusin and based on the most intricate and emotional murder case of his three-decade career in law enforcement, ‘Justice for Dallas’ takes readers back to 1986 as an entire family is slain. Embroiling the reader in the worlds of drugs, motorcycle gangs and good old-fashioned detective work, Rusin’s novel offers an insight into an unbelievable reality that actually does exist…

Lombard, IL -- (SBWIRE) -- 05/06/2014 -- During his thirty-plus years as a law enforcement officer, Mark Rusin experienced the thick and thin of life as a Las Vegas cop. From pulling bodies out of the 1980 MGM Grand Hotel fire to numerous exciting undercover cases, one out-of-the-blue murder investigation during his tenure with the Federal Bureau of Alcohol, Tobacco, Firearms & Explosives (ATF) was so impactful that the now-retired Rusin is turning it into a powerful new novel.

‘Justice for Dallas’ straddles fact and fiction to take readers into the investigation of a quadruple murder that left the ATF dumbfounded. While many confidential aspects of the case have been changed within the book, the crime’s premise, circumstances and conclusions remain as haunting and chilling as when Rusin first took on the case.

As a rookie ATF Agent, Marko Novak is assigned one of the most brutal murder investigations in northern California history. A mother, father, and 15-year old son are all shot "execution style" and their 5-year old daughter, Dallas has her throat slit from ear to ear. Their house is then doused in kerosene and set ablaze in an effort for the murderers to cover their tracks. Marko vows to find the killer(s) as he is emotionally affected by the crime scene photos, especially by the way the little girl died.

The investigation takes the reader on a wild ride to find the truth as the author Mark Rusin attempts to 'bring them along' on this investigative journey. The lives of outlaw motorcycle gangs are exposed along with the Federal bureaucracy as witness intimidation is dealt with, along with a host of other obstacles that need to be overcome in an effort to finally find truth and justice.

One pristine bullet, a motorcycle, some rug soaked in kerosene and 4 dead bodies are all the investigators had to go on from the crime scene. Later, a drug deal gone bad and some good old fashioned police work help make the case come together, but would it be enough?

“Most authors construct narratives in their heads – but I’ve walked, smelt and touched this scene in real-life,” says Rusin, who collaborated with Priscilla Barton during the book’s composition. “This allows me to take readers to a level of depth that is unmatched in other books.”

Continuing, “I suppose it could be classed as ‘faction’; as the only changes I have made are to preserve some of the case’s more sensitive aspects. Aside from that, everything is frighteningly close to reality. Believe me, this was one emotional case and it still haunts me today. I hope it gives readers plenty to think about.”

To date the novel has garnered rave reviews. For example, Cynthia Koss comments, “’Justice For Dallas’ is quite captivating, especially since this book is about a real case. Mark Rusin shows the human side of an actual investigation where innocent people lost their lives. It is a fast paced, easy to read book and I couldn't put it down.”

Max T. adds, “Wow, what a thriller. Caution: Once you start this book, there's no putting it down. This was obviously written by a cop - because it has a believability that is hard to beat. It was riveting. When do we get more from Mr. Rusin?!”

About Mark Rusin
Mark Rusin is a former Las Vegas Metropolitan Police Officer and retired ATF Special Agent. Rusin was born and raised on the south side of Chicago where he attended Quigley South High School. He went on to study Law Enforcement Administration at Western Illinois University in Macomb, Illinois.

Priscilla Barton is a writer based in the Southwest, who has also worked as a film curator, book editor, and agitprop artist. A member of Sisters in Crime, she divides her time between Santa Fe, New Mexico, and the high-desert country of southern Arizona. 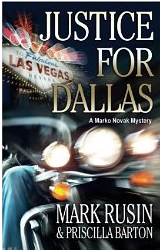