‘Case#1 - The Dreck Report’ is hailed by many as the ‘feel-good book of the year’. Having already been awarded 1st place in the Hollywood Scriptwriting Institute, the story of a tireless human cop-turned-dog is poised to bark its way into literature’s history book.

Having garnered global attention from some of the entertainment’s world’s toughest critics, it’s easy to see why the newly-released book adaptation has quickly found itself barking up the right tree.

No one thought as highly of Lieutenant Spencer Watley as he did himself. This selfish cop met 14 year-old Justin Andrews during an important stakeout. Determined to nab a group of cyber killers, he wasn’t going to let anything get in his way, especially a smart mouthed teenager like Justin.

After Spencer bids him good riddance, he is killed by the hackers and stands before the gates of heaven. But - what’s this? After a life of putting dangerous criminals behind bars, he’s locked out?

He yells at the angel blocking his entrance, only to find out he needs to go through the J.R.P. program before he can enter. That’s the Jerk Redemption program, otherwise known as sensitivity training boot camp, which to his horror consists of non-stop Oprah and Dr. Phil reruns. Or he can go back to earth and help Justin’s dysfunctional family. Spencer opts for the lesser of two evils, to help Justin.

But the Angel pulls a fast one on Spencer. He can only go back to earth in the body of his K9-Partner. Spencer refuses, but like it or not, Spencer becomes a dog. He falls back to earth and is slowly morphed into a dog that closely resembles a mop.

And if being a dog wasn’t bad enough, Spencer also swallowed an important microchip his killers need to hack into PC’s and steal millions. Now the criminals are hot on his trail for the only existing microchip that’s logged in his belly.

As the author explains, her book was deliberately written with themes that would appeal to wide and varied audience.

“It is a touching and humorous mystery with themes of family, forgiveness and redemption. A fast packed story with characters that just Pop. It will make you laugh and cry. A must read if you love dogs,” says Mueller, quoting feedback from readers.

In fact, since its release, the book has garnered a consistent string of rave reviews.

“Young readers will LOVE it! I loved it and everyone who just enjoys reading for pleasure - young or not, will totally enjoy this book. The bonus - there is something to be learned from the characters in this story about love, perseverance and forgiveness,” says Sandy, who reviewed the book on Amazon.

Readers Favorite was equally as impressed, with one reviewer commenting “As a veteran reading specialist I will have this on my top list and will rant and rave as I spread the word out there to schools as a great literature adoption.”

About Erna Mueller
I was born in Austria and my family immigrated to the U.S. where I attended grade school. My family and I returned to Austria where I completed my education and worked as an Accountant. I missed the U.S so much during this time I returned and became a U.S. citizen in 1990.

My new book, "K-9 Cop", is adapted from my multi national award winning screenplay. The adapted novel has won several awards including first place in the 2009 National Good Read Competition sponsored by awomenswrite.com.

I have traveled the world and lived in many exciting cities such as Paris, Munich and London. I currently work as an accountant for a large pizza company in Seattle by day and passionately pursue a career as a writer in my spare time. 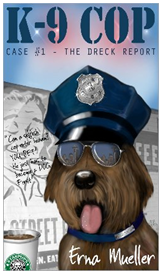