Goodlettsville, TN -- (SBWIRE) -- 10/09/2012 -- President Barack Obama has enjoyed a cozy three year reprieve from satirists, comics and humorists. However, thanks to the release of a biting new satirical novel by Dan Jewell, the President may find that all is about to change.

Ken Tool, or Obamaism was inspired by Voltaire’s Candide or Optimism. The novel tells the compelling and funny story of Ken Tool, a wealthy progressive Senator’s naïve grandson. Due to a series of unexpected and shattering experiences, Tool eventually doubts his faith in the President and the concept of “Obamaism,” his often extreme brand of progressivism.

“Ken learns that, on the surface, Obama’s political ideas appear as mild and benign as a smiley face,” says Jewell.

“But as a result of his terrible experiences, Ken comes to see that Obama’s ideas are destructive and have the potential to destroy the integrity of the United States.”

Realizing that his many ordeals are directly attributable to Obamaism, Ken despairs and his smug world comes crashing down around him. Coupled with the fact that he has been rejected by the ‘girl next door’ and betrayed by his friend and Progressive tutor, Tool quickly comes to believe that his family name may in fact be a literal reference to himself.

After changing his focus and rejecting Obamaism for good, Ken has a life changing encounter with his biological father and eventually goes on to build a successful garden center business.

“The book ridicules the Hollywood elite that openly support Obama and his policies. It also takes fire at mainstream media celebrities who openly display their bias,” Jewell adds. “The book is a satire, and it uses comic reversal, understatement, exaggeration, and other elements of farce to drive home its points.”

With critics tipping the book to become a powerful yet subtle prompt for people to show up at the polls and vote for what really matters, Jewell is poised to catch the hearts and imagination of all who read his novel.

About Dan Jewell
Dan Jewell is an author of political humor and mystery novels. His books include the award winning mystery, Blood Country, which is set in Nashville and the country music industry; a paranormal mystery Dream Country; and his political satire Liberalstein, based on the old Frankenstein story. He has three blogs (Tater Peel Politics, Country Dirt, and Nashville Mysteries) which promote his books, and another general blog, The Cumberland Post, where he posts about family, friends, cars, music, politics, and the city where he was born, Nashville, TN.

Although Jewell was an ivory tower liberal until 2002, he had begun to question many of his positions throughout the '90s. He says the Progressive reaction to the tragic events of 9/11/2001 sped up that process. He's been writing since 2004 when he retired from an enjoyable and challenging career in college teaching and administration. He's married and he and his wife have one son, 5 grandsons, and 2 great grandchildren. 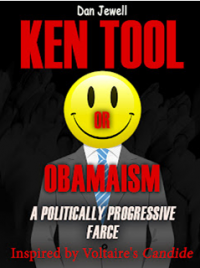