After losing his eighteen year-old son to alcohol poisoning, Barry Adkins walked from Arizona to Montana with his son’s ashes in his backpack. Kevin’s Last Walk—A Father’s Final Journey With His Son.

Gilbert, AZ -- (SBWIRE) -- 04/16/2013 -- In 2005 Barry Adkins became the recipient of the worst news any parent could receive; the death of his child. Alcohol poisoning took the life of his eighteen year-old son, Kevin, after an evening of binge drinking, on the very night he had moved out on his own.

“Alcohol destroys lives every day. In my book, I simply share the story of what happened to my son, how it impacted my life, and how even one night of binge drinking can have lasting and tragic consequences.”

Alcohol related accidents are the leading cause of death for young Americans, between the ages of 16 and 24, http://bit.ly/12OZTay. According to statistics from Mothers Against Drunk Driving, (MADD), teen alcohol use kills nearly 6000 people each year, more than all illegal drugs combined, http://www.madd.org/statistics/.

“Our lives are defined by how we respond to adversity. My book is a rare combination of humor, inspiration, forgiveness, adventure and tragedy. Every parent that reads my book will be highly motivated to not let this happen to their child.”

Kevin’s Last Walk is more than a book of loss and adventure; it’s a straight-from-the-heart and frankly-honest reminder of why abusing alcohol can have lasting and tragic consequences. ( http://kevinslastwalk.com )

About the Author: Barry Adkins
Barry Adkins has shared with tens of thousands of people the dangers of binge drinking, and his experience of losing his 18 year old son, Kevin, to alcohol poisoning. The day that was supposed to mark the beginning of Kevin's adult life, turned out to be his last, and Barry's message is both a powerful inspiration and a warning about the consequences of even one night of binge drinking.

Barry's compelling presentation has saved countless lives and is fulfilling his dream to "make something very good" come from his son's death. In 2007, Barry set out on an epic 1400 mile journey, and walked from Arizona to Montana with his son's ashes in his backpack. On a mission to share his story, Barry reached thousands through media coverage of the walk, and presentations at schools, churches and treatment facilities along the way.

To date, Barry has shared his story with over 50,000 students and parents across the country. Barry's presentation describes in powerful detail the night his son died, the quiet Sunday morning he got that "knock on the door", and how he came up with the idea to walk from Arizona to Montana. His presentation and powerful takeaways will leave your students enthralled and asking for more, and appreciating every breath they take.

Inspiration meets adventure in Barry's book that chronicles the tragic death of his teenage son, Kevin, due to alcohol poisoning, and his epic, 1,400-mile journey, from Arizona to Montana, with Kevin's ashes in his backpack. With a sense of humor that is rare among parents who have lost a child, Barry's book is a combination of humor, inspiration, adventure and tragedy.

Yup, his book will make you laugh, cry, and inspire you to help Barry make ‘Something Very Good’ come from the death of his son. Every parent that reads Barry's story will hug their precious children a little tighter. Barry wrote this book with audiences of all ages in mind. 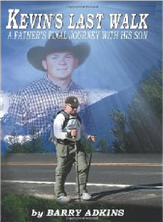