While the secrets of constructing the world’s most enigmatic monument were thought to have been lost 4500 years ago, a game-changing new book by Kurt Burnum exposes a mathematically-sound and scientifically-proven explanation that will settle all doubts. Debunking numerous adopted theories and uncovering the real role of counterweights in the construction process, ‘Khufu’s Counterweights!’ puts thousands of years of debate to rest for good.

Joshua Tree, CA -- (SBWIRE) -- 07/11/2013 -- For 4500 years Egypt’s Great Pyramid of Khufu has captured the hearts and minds of billions. Built as a tomb for fourth dynasty Egyptian, Pharaoh Khufu, the pyramid holds coveted status as the oldest and largest of the three pyramids in the Giza Necropolis.

However, while many find its presence awe-inspiring and sometimes life-changing, generations of mathematicians and scientists have debated and argued over the secrets of its construction. With the debate lasting for almost as long as the pyramid has been standing. After the discovery of the counterweight, a new book by The High Deserts of Southern California’s Kurt Burnum attempts to shed definitive light on these secrets and present the truth behind how it all came to be.

The arguments presented in ‘Khufu's Counterweights!’ are scientifically-proven, mathematically sound and therefore as close as humans will ever come to finding out the truth.

This story is a new rendition on an old topic. The Great Pyramid of Khufu! Possibly the most enigmatic monument to a single person in all of mankind! The secrets of its construction was lost in the desert sands of Egypt, but may be on the verge of being revealed through a new concept that may have been governed by Khufu himself over 4500 years ago.

Seen through the eyes of some of today's top theologians in the field of pyramid construction such as French Architect Jean-Pierre Houdin, The late Frank Steiger, and American Author of ‘The Riddle of The Pyramids’ Kurt Mendelsohn, "Khufu's Counterweights!" describes how not only roof for The King's Burial Chamber was constructed, but also the Queen's Burial Chamber and also including that of the rafters for the roof of the main entrance on the east side of the pyramid as well.

The author himself humbly took the time to explain to me that, ”He had taken great strides to provide the same accurate, and easy to use algebraic equations that The Ancient Egyptians would’ve used.” Which, he said, “Was made possible to Hemiunu himself by the physicality allowed to him by the counterweight itself!” While at the same time.” he said, “It would’ve made it possible for the equations to keep their ability to be mathematically sound even up until this very day allowing for the size of the pyramid.” Those of which are now demonstrated in this book by what he says is, “A show your own work” story problem format that gives you the methods that prove the new counterweight theories’ plausibility through reverse engineering and scientific fact documented using a model counterweight replica that was made just like the one used by The Egyptians...”

“French Architect Jean-Pierre Houdin, backed by computer animations using Dassault Systemes' computer animated software and the company itself, created the smash pyramid construction documentary ‘Khufu Reborn’. which made it seem more like a Saturday Morning Cartoon to him other than a pyramid building documentary after finding out that many of their concepts about the use of counterweights that were to be used for moving the large stone masonry even for just that of The King's Burial Chamber, had been proven to be unreliable and even next to impossible,” says Burnum.

Continuing, “So, in order to explain the way the inner chambers of The Great Pyramid were constructed, I manufactured a scaled-down model replica of the counterweights, described through e-mail interviews with Jean-Pierre Houdin, phone calls with him, reading his autographed books, and watching his Series of Pyramid Building Documentaries. Then, after idolizing his ideologies it came as a shock to me when I found out that he truly believed what he was saying, that he wasn’t going to listen to me about his theory stating that, “I was using his theory on my website to promote my own.” After that, I was left alone to debunk the theory on my own. So, through due diligence I had picked up the pieces that was left myself and with a clean slate offering up no resentment to Jean-Pierre Houdin, and eventually formed a new theory with proper mathematically sound scientific explanations for the way the entire layout of the inner chambers of The Great Pyramid were constructed on my own.”

Offering such a compelling theory, many experts and critics praise Burnum for his diligent efforts to settle many long-standing disagreements while trying as he says, “To not be too opinionated.” With the book’s popularity expected to soar, interested readers are urged to purchase their copies as soon as possible.

Lost somewhere in the desert sands of Egypt for over 45 centuries now time itself has been the only thing that has stood between us and the once great ancient civilization on the banks of The Nile River. The ones who built The Great Pyramid at Giza and their Pharaoh King Khufu who lived and died all those years ago. His secrets still stand now buried somewhere between us and the centuries of time that has passed between us but, once again in this new light it is time for the secrets of the past to be once again reawakened and put into place where the once long lost memories of A Pharaoh King and his Greatest Monuments deepest secrets are once again awakened and brought out into a new light. This revised edition of, "Khufu's Counterweights!" It is an in-depth look into the most enigmatic mysteries of all time that are consequently revealed due to study and diligence on the part of Kurt Burnum while Khufu’s deepest secrets are about to be revealed for the first time in over 45 hundred years! Looking towards the future, this is a good as it gets as far as pyramid construction goes!

About the Author: Kurt Burnum
Born in Ely, Nevada Kurt Burnum grew up in small town atmosphere not far from Salt Lake City Utah. Graduating from White Pine High School in 2002 he lead the life of a Blackjack Dealer in The Northeastern Nevada Casinos such as the Hotel Nevada and Gambling Hall in Downtown Ely. Currently living in the high desert of Southern California he resides with his Wife and Life Long Partner Celeste and six year old Cat Gabriel. His next best love is for The Great Pyramids of Egypt, the paranormal and his personal religion of Eckankar.

Besides those qualities he also possesses medical disability suffering from a mental disorder listed as Schizoaffective Bipolar Disorder, and has a supplemental income through Social Security Disability. Beyond that he's just a regular middle aged guy with a small family and a small group of tight nit friends. 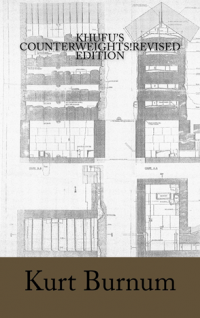