Kickstarter Campaign Launched to Celebrate the Stars, Constellations and Astronomy in Art

Fort Wayne, IN -- (SBWIRE) -- 02/03/2017 -- Alex Neumann, aerospace welder, designer and entrepreneur, has officially launched a Kickstarter campaign for 'Star Constellation Astronomy Space Keychain and Art', a celebration of the stars by memorializing them in various art forms. The Kickstarter campaign aims to garner widespread support and financial backing to manufacture, market and distribute his keychains and posters to a mass audience.

The newly launched 'Star Constellation' Kickstarter campaign is a celebration of the heavenly bodies surrounding us. With this campaign, designer Alex Neumann is blending science, art and crowdfunding like never before. Neumann has created custom machined metal astronomy keychains, dog tags, or astrology necklace pendants, each designed as a 2D view of stars representing ancient views from humans of the past. In addition, the 'Star Constellation' Kickstarter campaign is featuring large and beautiful detailed star constellation posters. Each poster is designed to open your eyes to the amazing stars surrounding us all day long. Designed to be placed on a wall for vision, inspiration, education and hopefully mood altering.

Inspired by a love for engineering and a 2016 visit to SpaceX, aerospace welder and designer Alex Neumann wanted to share his visions and get excited people about stars, space and constellations that shed light on us every night. "I'm passionate about stars and space, as well as welding and creating, so it was exciting to pair these two passions into a project," said Neumann. "I want people to enjoy this keychain, necklace pendant, or dog tag and every time you hold it remind yourself that you're amazing... stars are amazing, and just taking a break to think about that is... well, amazing"

Each Star Constellation Astronomy Space Keychain is designed by hand with an artistic license and are not scientifically represented or drawn to scale. Neumann estimates that more than 50 constellations will be designed. Each of the modern constellations will be made available to customers, along with additional, less well known constellations. Twelve of thirteen of the 88 "modern" are the popular western astrology astrological zodiac and the removed 13th and lesser known zodiac, Ophiuchus.

Each Star Constellation 24x36 poster sketched is out by Alex Neumann and features the northern hemisphere on the left and southern on the right. Simple yet very informative, each poster is created in black or white with zodiac type constellations featured on top starting with December/January the shortest days of the year, peaking in the middle to the longest days in the year in June.

Kickstarter is a funding platform for creative projects. Everything from films, games, and music to art, design, and technology. 'Backers' who support a project on Kickstarter get an inside look at the creative process, and help that project come to life. All 'Backers' of the 'Star Constellation' Kickstarter campaign who pledge $29 or more will receive a limited edition serial numbered 1 thru 100, Star astronomy constellation keychain. Additional rewards are available at different pledge levels. "I have watched Kickstarter for years now and finally decided it was time to develop something fun," says Neumann.

The Kickstarter campaign is officially open until February 21, 2017.

For more information about the Kickstarter campaign, visit: http://kck.st/2k2jljE 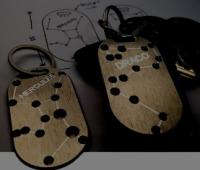