Mega Cat Studios has released Coffee Crisis, a Sega Genesis 'arcade-style beat 'em up' that pushes the console to its limits with beautiful remastered 16-bit hi-definition graphics. There is an additional tier in the kickstarter that includes a PC port to quench the thirst on all platforms of those who yearn for a beat 'em up that reeks of classic, arcade action.

"Stop the Smurglians and save the Earth!", is the theme behind this exciting Sega Genesis throwback. The Smurgelian race has arrived and they're not leaving until they steal Earth's four most prized commodities: its metal music, the best coffee, cat videos, and all of the Wi-Fi. Players can challenge the attacking aliens through unique and innovative levels inspired by real-life locations. Retro enthusiasts as well as newbies can join Black Forge Coffeehouse baristas Nick and Ashley, two galaxy gladiators called to arms to stop this madness and remove the Smurglian threat from Earth.

"The story behind Mega Cat Studios is a simple one. A small team of passionate people, caked in video game nostalgia, banded together and locked arms to create what many modern gamers never knew was possible, let alone relevant - to make new video games for old consoles," Said team member Will Gorusch. "Recapturing that familiar feeling often referred to as "classic" and "old school" in our games is a small, but important part of Mega Cat Studios."

Coffee Crisis is the first Sega Genesis release from Mega Cat Studios in 2016, a game company that is the result of a hobbyist effort of retro enthusiasts and developers from across the globe. As the Company states, it represents an effort to create a brand new, fully-fledged game from the classic era in all its "catridgy", physical glory.

"This Kickstarter campaign is not about us. It's about [gamers]. Gamers who want to support and be part of a vibrant and active retro community…We want to make the kinds of games that [gamers] wanted to play, the kind of games you wanted to make. And [Kickstarter] can help us do it," says Zack Manko

Kickstarter is a funding platform for creative projects. Everything from films, games, and music to art, design, and technology. 'Backers' who support a project on Kickstarter get an inside look at the creative process, and help that project come to life. All 'Backers' of the Kickstarter campaign who pledge $49 or more will receive a physical copy of Coffee Crisis, while those who pledge at least $25 will receive a digital version that can be downloaded and played on the PC. 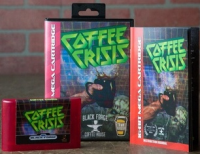