Ryan Polomski and Dean Prator are launching a Kickstarter campaign to complete the documentary film “Raymond Lewis: L.A. Legend. In spite of his amazing talent, Lewis never played a minute in NBA basketball.

Los Angeles, CA -- (SBWIRE) -- 04/03/2015 -- Ryan Polomski and Dean Prator are pleased to announce the launch of their Kickstarter campaign to produce a documentary about LA basketball legend and NBA walkout, Raymond Lewis. The projected film already encompasses countless hours of research and interviews. The goal of the Kickstarter campaign is to raise $45,000 to complete additional interviews in the production phase, as well as post-production expenses.

On the playground, during his high school, and college career, Raymond Lewis was perhaps the greatest pure shooter in the history of Southern California. He grew up in Watts, the scene of the infamous riots of 1965, but also home to a number of highly successful businessmen, politicians and professional athletes. He attended high school at a small all-male Jesuit high school called Verbum Dei, or "The Verb". From there, he went on to play at Cal State LA, where he dominated the college statistics.

In 1973, he signed a three-year contract with the Philadelphia 76'ers, but ended up in a dispute with them and never played in the NBA. Some of the basketball greats of the period have recognized Raymond Lewis as the best basketball player ever. The documentary includes multiple interviews with greats such as Laker great Michael Cooper, NBA All-Star Reggie Theus, University of Washington head coach Lorenzo Romar, former 76er coach Gene Shue, ex-Nike executive Sonny Vaccaro, and legendary UNLV College coach Jerry Tarkanian.

Principals for the documentary are Dean Prator, a South L.A. native, and director and producer, Ryan Polomski who is an award winning documentary filmmaker and television editor. The funds from the Kickstarter campaign will allow the documentary to be completed. The story is one which will appeal to inner-city school kids. The film is slated for release in January 2016.

A spokesman behind the Kickstarter campaign said: "This is too important and too interesting of a sports story NOT to be told to the world. Raymond Lewis could have one of the greatest players of all time!"

More information about the campaign and about the NCAA legend is available at https://www.kickstarter.com/projects/1931494002/raymond-lewis-la-legend

About The Kickstarter Campaign
The campaign has been launched to complete a documentary that will tell the story of L.A. Basketball Legend Raymond Lewis 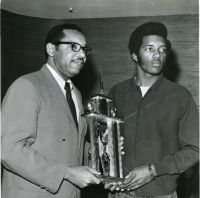