A Kickstarter "crowd funding" campaign to underwrite commercial production of a new multifunction demolition and construction tool, the Cole-Bar Hammer, has raised $96,853 in pledges after just 22 days.

Roan Mountain, TN -- (SBWIRE) -- 05/22/2013 -- A Kickstarter campaign to fund commercial production of a new multifunction demolition and construction tool, the Cole-Bar Hammer, has achieved 96% funding after just 22 days. Over 1,351 backers had pledged $96,853 of the project’s $100,000 goal, according to the project leader, Brandon Hyde and the tool’s inventor, Lance Hyde. The project had already proven popular on the funding platform—it had raised over $30,000 before the campaign was officially launched at the 2013 National Hardware Show on May 7.

Kickstarter is a “crowd funding” website that nearly four million people have used so far to fund over 40,000 creative projects in the arts, technology, design, and more. The Cole-Bar will only be funded if at least $100,000 is pledged by Monday Jun 24, 9:11pm EDT via Kickstarter.com. “Funds will be used to build the moulds, tooling and pre-production, testing, marketing and distribution, among other things,” according to Brandon Hyde, son of Lance Hyde.

A combination hammer, crow bar, a demolition tool, angle measurement tool, ruler, a socket wrench and nail pliers, the Cole-Bar Hammer was a finalist in a DIY Network inventors competition. The Cole-Bar’s inventors have been refining their prototypes for over five years.

“We’ve faced some challenges and obstacles with bringing the Cole-Bar to the market, but we have never given up no matter what we have faced. We will continue to do so until we can put it into the hands of consumers.”, said Brandon.

Several different funding levels are being promoted on the site. Donation levels start at $1 and go up to $5,000 or more. So far, the most popular level is $65, in exchange for which the recipient will get a production model of the demolition tool. Over 1,257 backers have pledged at this level. Anyone donating at the $5,000 level will receive one of the first numbered 5 thru 25 Cole-Bar Hammers along with a certificate of authenticity signed by the inventor Lance Hyde, plus a picture of Cole Hyde, the eleven-year-old boy who inspired the tool. Donors at the $5,000 level will also enjoy a trip to Indianapolis and dinner with the Inventor and family, plus an invitation to join the inventors and supporters on the production set of the Cole-Bar Hammer infomercial.

About the Cole-Bar Hammer
The Cole-Bar Hammer is named for its inspiration, Cole N. Hyde. Cole was just eleven years of age when he and his father Lance Hyde were building a pole barn. While putting tools away after a long day, Cole had laid a crow bar on top of a hammer. They both had the same thought, “Wouldn’t it be nice if you had a hammer and crow bar together?” Sadly, Cole passed away at the age of twelve after a tragic accident but his father and family never gave up on Cole’s idea, manufacturing 5 prototypes over the years to test and refine the concept. A successful Kickstarter campaign will fund production and marketing of the first commercially available Cole-Bar Hammer. 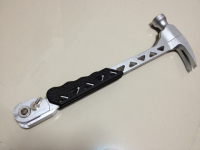