As the first volume in the upcoming ‘The Luminaries Series’, ‘Kinetic’ uniquely fuses the author’s stunning and vivid world with humor, romance, action and a kick-ass heroine. With a growing following, Anthony is set to become a staple of the Sci-Fi/Romance genre.

New York City, NY -- (SBWIRE) -- 09/25/2013 -- While most new authors use their first release to simply test the literary waters, New York’s S.K. Anthony is quickly proving that a debut novel can easily compete with its genre’s best-sellers. As a powerful newcomer to the emerging ‘New Adult’ genre, Anthony’s wholly unique writing style is about to delight fans from coast to coast.

‘Kinetic’ is a bold and hard-hitting new release; making up the first volume of ‘The Luminaries Series’.

Being strong is one thing. Being an unlimited source of power is quite another. Genetically altered by the Organization, Annie Fox takes down criminals CIA-style with her luminary strength. With nothing to mend but her broken heart, she is relentlessly pursued by her boss Derek Lake. Just when Annie is about to give him a chance, her ex-husband unexpectedly comes out of hiding.

A wanted man, Nick Logan is a cold-hearted murderer who is considered enemy number one, and orders are clear: kill on contact. He is more powerful than ever and threatens the lives of those she holds most dear. His plan? Get his hands on Annie and use her Kinetic energy to destroy them all.

When Annie finds herself with an opportunity to end him, she pauses, horrified by the scars covering the face she once loved. A split second that will cost her everything…

As the author explains, her book is trying to carve its own unique place into a genre that’s rapidly booming.

“New Adult is the new genre that is buzzing around and gaining more and more fans. My book has light Sci-Fi undertones, but it’s more directed at those who love a bit of romance. I’m classing it as a New Adult Urban Fantasy novel,” says Anthony.

Continuing, “All books in the series are stand alones with the characters intertwined. The setting is very different to existing novels and this is sure to give readers a whole new world to explore.”

Critics praise the author for the diligent attempts she is making to buck the trend and provide readers with a narrative unlike anything they’ve ever read before.

According to Anthony, there is plenty more on the drawing board.

“I’m currently writing the series’ next volume. There’s plenty more to come from The Luminaries world and, while I can’t say too much, I will admit that the best is yet to come!” she adds.

With the book’s popularity expected to rapidly increase, interested readers are urged to purchase their copies as soon as possible.

About S. K. Anthony
S. K. Anthony is a writer, a reader and a make-stuff-up-er who lives in New York with her husband and toddler twins. She is a wine connoisseur, which just really means she knows she loves it, and a caffeine addict. When she isn’t busy with her family she finds herself being transported into the world of imagination. Well, either that or running away from spiders…she is convinced they are out to get her! 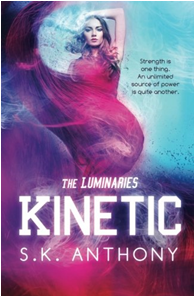