A blue print and guide book for the future, GOD’S NEW PLAN FOR THE HOLY NATION AND THE PAST contains over 650 Pages along with over 70 “Laws of the Universe.” Published by IUNIVERSE.COM, this NEW Book also contains information about FUTURE events and is intended to HELP Mankind.

Marietta, GA -- (SBWIRE) -- 04/16/2012 -- About two DECADES in the making, KING David’s NEW BOOK proves that he is KING OF KINGS AND LORD OF LORDS. GOD’S NEW PLAN also PROVES that he is the Past, the Present and the Future and also- “The Supreme Authority.” KING David’s book also PROVES, that “With GOD, ALL things ARE Possible.”

GOD’S NEW PLAN FOR THE HOLY NATION AND THE PAST BY KING DAVID also features over 50 pages of “The Laws and Punishment of Man,” that also PROVES that KING David is “The Law” and CANNOT be Judged by Man. GOD’S NEW PLAN is also available as an e-book which, saves natural resources.

About KING David
Born on April 8th 1962 KING David is a Christian Man. He is also a poor, humble servant of the LORD. He believes that reading the HOLY BIBLE, faith, good works, writing, good health and family are important aspects of human life. He is a hard worker and is dedicated to his beliefs and helping humanity. KING David also believes that creativity and a vivid imagination are far more important than mere knowledge. God appreciates and enjoys creativity. For, his creation of “blue butted baboons,” proves this to be true. And, Walt Disney was no doctor or rocket scientist and look, how far his creativity and imagination got him, instead of mere knowledge. For, KING David believes that mere knowledge is limited and can only take a person so far. KING David knows the future and has a vision and a plan for the future. For, he has also written a book entitled- “THE FUTURE” which IS locked in his Safe and NO ONE may gaze upon its Secret Pages. KING David is a very talented man and is also very wise, kind and understanding. If seeing is- believing then not seeing is doubt, nothingness and an empty bottomless abyss. KING David went to R.B. Stall High School in North Charleston, South Carolina and graduated at 1980. He is a musician and plays drums, guitar, keyboards, sings and is a song writer as well. KING David sold Real Estate in the past and has had some College Education over the years. He served four years in the Air Force and received an Honorable Discharge. KING David is also a Jeweler and a former Semi Truck Driver. He holds a CDL and can still drive commercial vehicles, buses and motor-homes. KING David is also a book illustrator and has illustrated- THE PAST. And, now I ask you. Is this the TRUTH or a lie? For, the TRUTH can never be a lie and a lie can never be the TRUTH. KING David’s favorite philosopher is Albert Einstein and his favorite writer is Edgar Allen Poe. KING David believes that life is not about the things which are seen, but of the unseen. For, music, atoms and the wind cannot be seen, but they do exist. GOD is alive and he is generous and merciful. KING David gives ALL of the Glory to GOD and the Hosts of Heaven. Amen. 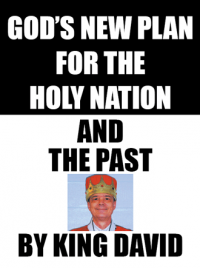