Spoon is, at heart, an engaging tale of fantasy, horror, humor, family and love.

Synopsis: Derrick Danniel Megason clenched a spoon like a sword, a brave ten-year-old, innocent of the outcome. He disregarded what his mom had told him about the legend and the supernatural being he'd encounter.

It all started fifty years ago at Hill Lake when Derrick's grandparents, Emery Strong and Ester Paul, both sixteen, vowed their love. Unbeknownst to the teens, an evil supernatural being from another dimension observed them. It followed the teens and wreaked havoc in the town of Silverton. Blood writings appeared at homes where pets vanished.

Manny Orray, Emery's friend, gifted with psychic abilities, deciphered the writings drawn in pets' blood-a call to battle. The time of the challenge is always twelve midnight. The weapon of the evil one is a three-pronged fork, its challenger's weapon a spoon. The vehicle to get to the battle area in another dimension is the home marked by blood.

“The book allows both young people and adults to enter a world that is totally different to their own. I placed a big focus on rich descriptions and vivid representations to allow readers to totally immerse themselves, for a journey they will never forget” explains Ryan, who used Spoon to celebrate his debut foray into the world of publishing.

Since its launch, the book has garnered rave reviews.

“Kris creates vivid characters and imagery while maintaining a gripping story line. This book, while directed toward children, will be enjoyed by adults and children alike. Kris takes the battles between good and evil to uncharted areas and does so with entertainingly new twists. Looking forward to your next book,” says William P. Sacco, reviewing the book on Amazon.com.

Now available as an e-Book, Spoon is eligible for instant delivery via Amazon’s Kindle Store, allowing readers to immerse themselves in the action just minutes after ordering.

“The Kindle format is perfect for the young people of today. The market demands accessibility and download without delay, this is exactly what we will achieve by releasing the book in e-Book format,” Ryan adds.

Spoon is priced at just $9.95 and can be purchased by clicking here.

About the Author
The author grew up on the Big Island of Hawaii and now resides in Henderson, Nevada. He earned his bachelor’s degree from the University of Hawaii and is a former officer in a combat engineer company for the Army National Guard. 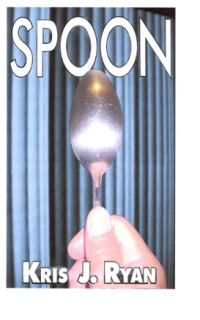