The ep will include Single "Leave me In Detroit," previously released as a part of the All These Noises compilation, presented by NYC based booking and consulting firm TJO Presents and NJ's Starbeat Music (http://allthesenoises.bandcamp.com).

For the track, the band traveled to LA to record with the Social Security production team, which consists of Former guitarist Todd Weinstock (Glassjaw, Men, Woman & Children) and producer Marc Jordan (Velvet Revolver, The Cult.)

The band have also produced a video for the track, which they describe as an "intense artistic dramatization of domestic abuse," one of the social issues which is addressed in their work.

You can stream "Leave me in Detroit," at, http://allthesenoises.bandcamp.com/track/leave-me-in-detroit.

For the shooting of the video, the band teamed up with friend, film maker and fellow musician Peter Gutter,(“Puzzling...with Magnus, The Midnight Suns), to craft a venomous horror story, which perfectly fits the tone of the track;telling the story of a couple poisoning each other in to madness.

Descend marks a continuation of the neo-noir duo's exploration of various social issues including Domestic Violence, depression and the sex trade. The ep is a continuation of La Fin's intensity, chaos, and sex appeal encompassing and blending beautifully ambient and dissonant sounds, gorgeous melody, and vivacious energy.

Their previous releases has received coverage from MTV Hive, Guitar Jar, and countless other national and international publications.

Advance coppies of the epm, as will as interview opportunities are available
Contact--
For all inquiries
TJ Olsen
TJO Presents
347 987 1193
tj@tjopresents.com
for label inquiries contact
foolscircle@gmail.com 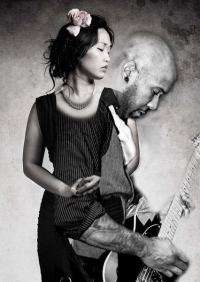