Written by Pam Ward and inspired by real-life events, ‘Want Some Get Some’ is the topical tale of Trudy, AKA: Trudy with the Booty, a young woman whose life is twisted upside down by her ex, Lil’ Steve. As explicit videos of her litter the community, she plans her revenge, schemes with her crew and dreams of escaping the streets. Sensual writing, raw emotion, a motley cast of characters and a good dose of humor make this debut novel one to watch.

Los Angeles, CA -- (SBWIRE) -- 04/08/2014 -- During the 1970s and early 1980s, Jayne Kennedy was the Halle Berry of her time. That is, until a sex tape of her and her husband Leon Isaac Kennedy was released into the public domain, and the perception of Jayne as celebrity and as a role model was annihilated. Unable to ever recover her reputation, Jayne faded into obscurity and to this day, has never regained the fame she enjoyed as a young woman.

Pam Ward, author of ‘Want Some Get Some’, found Jayne’s story to be about more than just a fall from grace – it was a case of vicious and systematic exploitation. Inspired by Jayne, Ward wrote her novel and created the character of Trudy – a woman who also finds out that nude videos of her have been circulated in the community.

“Trudy is a survivor, and I see a lot of beauty and fierceness in that. As someone who has witnessed and experienced violence, I wanted to explore this theme within the backdrop of Los Angeles,” says the author. ““I wrote WANT SOME GET SOME on my front porch during the three week hiatus the riot created from my design business. None of my clients wanted to come where I worked off Crenshaw and Adams so I had a great window to do something else creative.”

Writing the whole book long-hand, using her daughter’s notebook paper, Pam was literally seething. “I was breathing in all that riot smoke, watching telephone poles blaze up like big Christmas trees as gangs of folks raced home with fresh stolen booze. Nobody on the news was reporting what I saw.”

First published in 2007 and now being re-released as a two-part novel by Kensington in June of 2014, ‘Want Some Get Some’ is a devastatingly accurate portrayal of the quest for revenge, and a searing portrait of one woman’s struggle to survive, at all costs.

"A Gritty Street Tale Bristling With The Muscle And Teeth Of Iceberg Slim And Donald Goines. Trudy, a.k.a. "Trudy with the Booty" knows what she wants and how to get it. But a better life far away from the jacked-up streets of South Central L.A. needs to be financed, and she can't think about leaving without handing some sweet payback to Lil' Steve, her slick talking ex. Ever since he started selling nude videos of her to the neighborhood men, Trudy can barely walk the streets. His demise would be the icing on the cake. But Trudy's plan to get even and escape the ghetto is more than risky-it may be the worst mistake of her life. Having recruited a crew of hustlers, car-jackers, and homewreckers who hang out at the seedy nightclub, Dee's Parlor, where she sings nights after working days as a bank teller, Trudy is ready to put her scheme into action-a heist that can make them all rich. There's just one problem: Jimmy, a stone-cold killer who doesn't like being ripped off. And while the best laid plans often do go awry, no one could have guessed where this wild, crazy ride takes this cast of bumbling lawbreakers and heartbreakers as they scramble over and under each other to get what they want. A fast-paced, exhilarating drama with sharply drawn characters, sultry writing, and a fierce intensity of emotion, Want Some, Get Some is a brilliantly assured debut. A promising new talent, Pam Ward brings a woman's sense of bravado to a boy's game."

Since its release, ‘Want Some Get Some’ has earned a five star rating on Amazon, and glowing reviews from readers.

“Pam Ward has weaved a tale about a girl name Trudy that is set on getting revenge on her ex boyfriend Lil Steve. She comes up with a plan to get her out the hood and at the same time pay him back for giving her a bad name. I couldn't put this book down once I started it! This author is so detailed that you feel as though you are one of the characters! I read a lot of books, but this one so far is my FAVORITE!” wrote Dimples

“Trudy was especially well-drawn. She was a beautiful woman but the child of a jealous, selfish woman who told her she was ugly which caused her to fall for the first man who smiled at her. Unfortunately for Trudy, it was the wrong man. The action was fast, the tension high and you found yourself talking to the characters, telling them to back off before they got hurt. It was an enjoyable story,” wrote The RAWSISTAZ ™ Reviewers.

Writing that she “couldn’t put this book down!” citygirl also said: “This story is raw and it's street. It's also refreshing that Trudy wasn't living "ghetto fabulous" which has become too common a lifestyle in today's urban fiction. She wasn't regarded as street royalty, driving around in the latest cars, and dripping in diamonds (so bored with those stories). She's a girl who is trying to make her way out the best way that she knows how; getting even with a hustler who did her wrong is just gravy! I loved this gritty tale and can't wait to hear more from this author!”

‘Want Some Get Some’ is available now: http://amzn.to/1eR0RuO

About Pam Ward
Pam Ward is a Los Angeles native. Her work can be found in Best American Erotica 2002, Men We Cherish, and poetry in Catch the Fire!!! She's the recipient of a California Arts Council Writing Fellowship, a New Letters Award for Poetry and was recently nominated for a Pushcart Prize for Poetry.

This is her first novel. Her second novel is entitled Bad Girls Burn Slow, Kensington, 2008. Pam is currently working on her third novel. 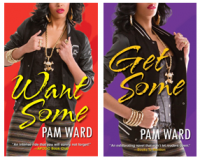