Hudson’s book, ‘Boxer of the Year: Hudson VGM’ was originally released in 2003 and uses the author’s experience of suing General Motors as a steadfast example to inspire other African Americans to stand up to big corporations. However, in the ten years since the book was released, Hudson’s original dispute has been settled along with a range of other unique occurrences. Could this be the miracle-working power of God at play?

Lansing, MI -- (SBWIRE) -- 09/11/2013 -- 2003 marked a landmark year for African Americans in the United States as Elmo Hudson’s new book showed them how to stand up to big corporations and fight not just for a resolution, but to prove that equality in the workplace runs more than skin-deep.

Synopsis for ‘Boxer of the Year: Hudson VGM’:

The benefits of this book is to inform the public how General Motors treat their black employees that files a Civil Rights complaint and lawsuit against them. They will commit fraud and conspiracy before the courts. This has been going on since August 19, 1983 to the present.

This book is about all the pain and hardship I have to go through as a result of this ordeal. This will inform the blacks of what to do and say. And how they can be victorious against a large Corporation. I have experience everything that I am talking about for twenty years and still trying to get some closure from this ordeal.

I have experience seeing a psychiatrist and psychologist since May 15, 1985. I was taken off work in July of 1992 and was placed on total and permanent disability with Social Security. This also tells about me leaving home and moving south to Arkansas and having to go to a all-black school.

I also had to plow the white man field with two mules and a plow. I also won several titles in Golden Gloves Boxing and was the number one boxer at one hundred and twenty six pounds featherweight here and I was nominated for all Army boxing. I would say to pursue your goals until you get the justice you so deserve.

Almost twenty years after filing his first complaint against General Motors, Hudson is delighted to announce that he has reached a resolution. However, it wasn’t directly through the courts.

“I was always known as a strong Christian man at General Motors, so it isn’t surprising to learn that I prayed and prayed for an exact sum of money. This is the exact sum I was awarded in the settlement!” says Hudson, who was recognized as Lansing’s first African American to win 'Boxer of the Year' in the New Citizen Press African American Newspaper, to coincide with 2012’s Black History Month.

He continues, “My story is very close to that of Trayvon Martin. I was assaulted and cut over my eye by a racist white woman, just for trying to do my job and not wanting to fight back. This went on for almost twenty years and Doctors later confirmed that I could have died many times.”

“In June of 2008 I was diagnosed with Alzheimer’s and told I’d be bedridden within a few years. However, suddenly, I found myself healed by the power of the Holy Spirit – later confirmed by Doctors in May of 2012. A true miracle that proves God is working wonders every day!” he adds.

While none of these later experiences are in the author’s book, is still tells a powerful tale of trying to overcome adversity and looking beyond the color of one’s skin. It’s declared a ‘must read’ by many critics and should be purchased by anyone looking for a truly inspiring read.

‘Boxer of the Year: Hudson VGM’ is available now: http://amzn.to/15Oemd3

The author can also be followed on Twitter: https://twitter.com/HudsonElmo

About the Author:
The author lives in Lansing, MI. 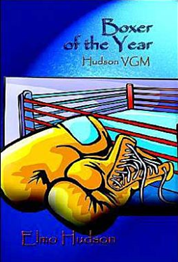