About Le Cordon Bleu College of Culinary Arts
Founded in 1895 in Paris, Le Cordon Bleu is the only French culinary school in operation for more than 100 years. It took its name from 16th century French knights who wore blue sashes and were referred to as the “Cordon-bleus.”

The most recognized alumni of the program are Julia Child, Bobby Flay, Mario Batali, Giada de Laurentiis and Jamie Oliver. Le Cordon Bleu operates 30 schools in 15 countries. One of them is the inducted “Le Cordon Bleu College of Culinary Arts in Chicago.”

About Le Cordon Bleu College of Culinary Arts in Chicago:

Certificates and associate degrees are offered in “Culinary Arts” and “Baking and Pastry Arts”. Its campus is located in the heart of Chicago and offers programs in industry-equipped kitchens in a hands-on environment. 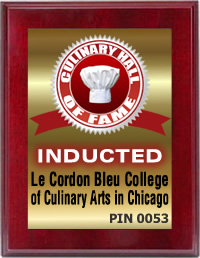