Burbank, CA -- (SBWIRE) -- 02/07/2017 -- Hollywood may be the mecca where actors from across the nation – and even around the globe – go to pursue their dreams, but that doesn't stop one acting studio from shining and standing out amongst a sea of other acting classes and teachers promising results. The Heller Approach, a world-class acting studio in Burbank, CA run by Brad Heller, certainly qualifies for this position.

What makes The Heller Approach so special is due, in one part, to a very special acting technique and, two, to a committed and passionate instructor. Brad, who was mentored by Don Richardson, is an actor, teacher and director. Brad was Don's protégé and, after Don's passing, Brad began teaching and coaching Don's revolutionary non-method acting technique at UCLA for 5 years and privately in his own school. Brad has since built a very successful acting and producing career, appearing in hundreds of TV shows, commercials, and films. Most recently, guest starring in a very well received role on "Criminal Minds" and in the Academy Award Nominated film, "MOST."

Brad has always felt compelled to carry out Don's legacy and has taken many actors from beginner to master in a very short period of time. Brad Heller is widely considered as offering the best acting classes in Los Angeles and as being the best acting coach in Hollywood and his students certainly seem to agree.

Brittany Finamore of Glee, Cory in the House, Ghost Whisperer, Another World reflected on how quickly her learning process was and how acting doesn't have to be torturous: "The Heller Approach is so refreshing compared to other classes I've taken. In my very first session with Brad, Ihad a moment of clarity and I knew right away what needed to be changed in the scene we were working on. I love the idea of not having to be beaten down and broken to be a good actor. You can still give a great performance and have fun with it!"

With a plethora of real world experience under his own belt, students benefit not only from Brad's acting wisdom, but receive sounds and pragmatic advice such as how to be prepared for auditions (something intrinsically embedded within the non-acting method to begin with). Actor Alex Goode said it best when he shared, "The Heller Approach could not be more practical; as a teacher, Brad arms his students with the tools necessary to tackle any situation."

Other students such as Hector David Jr., who has appeared in Percy Jackson & the Lightning Thief and Power Rangers Megaforce, expounded upon the support and comradery Brad and The Heller Approach offers: "When you have someone like Brad Heller apart of your team, you don't need anybody else. Genius."

Truly a place where students realize acting is more than about tormenting themselves just to get one part, but rather an educational center that accepts new students and experienced actors alike and shows them that through hard work, acting can be a truly enjoyable career and, in the process, they are provided with the everyday tools they'll need to make it in the long run and adapt to each situation they encounter.

About The Heller Approach
From Tyler Blackburn and Natalie Distler to David A.R. White and Masi Oka, students of The Heller Approach have successfully created acting careers, and constantly keep their acting tools sharp with the studio. Brad's students have booked series regular, recurring, guest starring, and co-starring roles on hit shows like "Greys Anatomy", "Extant", "Heroes", "Anger Management", "Two And A Half Men", and "Mike And Molly". They have also starred in major Studio Films and Broadway theatre productions as well as and hundreds of commercials. Brad has also taught many professional comedians how to take their comedy and put it into a believable character ultimately leading to sit-com work. 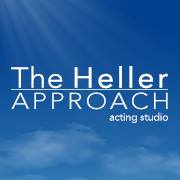