Shenzhen, Guangdong -- (SBWIRE) -- 12/13/2013 -- MacZOT, online promoter widely known for offering great Mac apps at incredibly reduced prices, today announced that they have partnered with the top Mac software developer - Leawo Software to offer $44.95 worth Leawo Blu-ray Ripper for Mac at $14.95 only. The amazingly discounted offer is only available between Dec. 14 and Dec. 15, 2013. People wanting to back up their Blu-ray collections to Mac, rip Blu-ray for playback on any portable player and protect precious Blu-ray discs from being damaged and scratched could take action now.

Currently many of people are looking for easy ways to turn their Blu-ray and DVD collections into digital copies on Mac, so that they could store movies in a cloud, access movies anyway, protect those too-easily-scratched physic discs and even make disc unprotected plus region free. Since the needs are crazily on the increase, MacZOT decided to cooperate with Leawo Software to launch the nearly 70% off Leawo Blu-ray Ripper for Mac deal.

So what Leawo Blu-ray Ripper for Mac could do for Mac users? This Blu-ray ripping software gets Mac DVD Ripper and Mac Blu-ray ripper into perfect combination. It could convert both DVD and Blu-ray to common video and audio for saving on computer hard drive. Besides, it enables users to rip DVD and Blu-ray for playback on various portable players like iPhone 5S, iPad Air, iPad Mini, iPod, Android, etc. Notably, it has the power to remove copy protections on any Blu-ray and DVD, certainly including the latest releases. Making disc movies region-free is also just a breeze.

Leawo Blu-ray Ripper for Mac also gets plenty of advanced features Mac users will appreciate so much like creatively editing Blu-ray movie, making 3D movies out of 2D Blu-ray, desired subtitle and audio track selection, neat interface, fast ripping speed, high quality output, and more. As a full-featured program excels in backing up as well as ripping Blu-ray and DVD, Leawo Blu-ray Ripper for Mac is really worthy much of Mac users' attention.

About MacZOT
MacZOT is the leader in bringing great deals on Mac software to the Mac community. Each day MacZOT offers Mac applications at unbelievably discounted prices, usually between 40-70% off the regular retail price. MacZOT features a huge variety of the best independently developed Mac software and hundreds of apps per year. MacZOT is the best to connect Mac users and Mac developers worldwide. 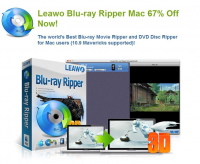