Kuala Lumpur, Malaysia -- (SBWIRE) -- 06/12/2017 -- Legend of Firefly Kingdom: D&J Animated Series is an animated TV series full of comedy and adventure. With the themes of love, hope, patience, sacrifice, family, friendship and dreams, the TV series has a strong storyline and the first season that took two years in the making will feature 13 episodes. The creators of this project are now seeking community support on Indiegogo and they are welcoming everyone to back this series. Moreover, the content is 100% original and the series will hit the TV soon.

According to the synopsis of this phenomenal TV Series, two mischievous & adorable 'firefly fairies' are accidentally chosen to recover all the lost magical music boxes to prevent 'Dark Shadow' from taking over the world with nightmare and darkness. Both 2D and 3D Animations are used to create this series and it is expected to receive overwhelming response from the fans worldwide. According to the creators, the entire Season One take two years, dozens of local  talents, a host of writers and animators as well as musicians and composers; and countless inspirational to produce.

Following is a brief overview of Legend of Firefly Kingdom TV Series:

The Indiegogo Campaign is located on the web at: www.indiegogo.com/projects/legend-of-firefly-kingdom-d-j-animation-series-anime-tv--2 and it offers pledges that range from $5 to $6000 with rewards from gratitude to the status of D&J Series Associate Producer offering several great perks. 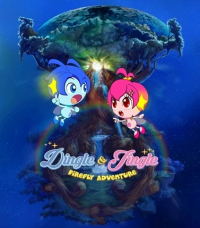