Cook has owned the Lemon Grove Deli and Grill for 13 years. He was born and raised in Lemon Grove, and was elected to Lemon Grove City Council in 2010.

City Council Member Howard Cook believes that Matt Mendoza is the right choice for the City of Lemon Grove. He stated that he fully supports Mendoza for City Council and looks forward to working together with him to improve Lemon Grove's Economic security and Infrastructure.

With this New Endorsement by Councilman Howard Cook, Matt Mendoza now is endorsed by two of the current Council Members. Mendoza is gaining ground with getting support from business owners and other great leaders. The main consensus is that Matt Mendoza is the Right Choice for the People of Lemon Grove. He knows how to bring the community, businesses and local government together to get things accomplished. Lemon Grove needs a leader such as Mendoza and would be honored to have him as a representative for the City.

To learn more about Matt Mendoza and how to support his candidacy for the Lemon Grove City Council seat, please visit: http://www.MendozaForLemonGrove.com 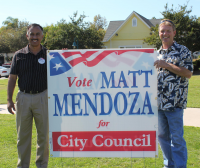