Miami, FL -- (SBWIRE) -- 04/06/2018 -- EYES OF POSEIDON, available on Amazon and at your favorite bookseller (and as an eBook) is a follow-up to the award-winning "Storm Crashers," also inspired by unique South Florida crimes.

In Richard Wickliffe's new novel, Eyes of Poseidon, a successful Miami doctor leaps from a cruise ship in the dead of night. His devastated wife, along with an FBI agent who works organized crime, unravel his fate. He'd been lured by a tempting new organization who promised wealth and success.

But after threats and extortion, he knew there was no way out. His family would never be safe. What the wife and Russian Bratva discover next changes everything.

The concept was inspired by real crimes outlined in Richard's published article, The Russian Mafia: A Rising Threat of Fraud and Violence," including actual details from FBI arrests involving bogus medical clinics and alluring girls who'd drugged and robbed tourists along South Beach.

Since Richard's last book was optioned by Twentieth Century Fox, he's already written the screenplay for Poseidon –just in case.

Video trailer of the book on YouTube. See more at http://www.RichWickliffe.com.

FIVE-STARS – "A spectacular thriller with compelling characters and an intriguing storyline that will delight readers who love suspenseful stories told inside out. The book opens with a cliffhanger, impossible for the reader to put down until its breathtaking conclusion." – Susan Sewell, Reader's Favorite

This is Richard Wickliffe's fourth novel, inspired by actual crimes. He's a winner of Best Popular Fiction at the Florida Book Awards for his last thriller, which had been optioned by a major film studio. Rich enjoys speaking about creative crimes, including at the FBI's InfraGard Counterterrorism conferences. His writing typically borrows from the unique (scandalous, criminal or satirical) environments of South Florida where he resides with his family. 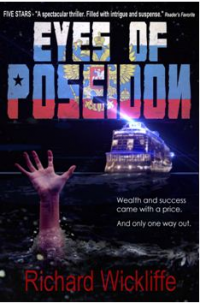