Locally Produced Film to Be Released on DVD

San Antonio, TX -- (SBWIRE) -- 09/25/2012 -- Any Last Words, the first feature film shot in the greater San Antonio area by husband and wife team Paul Tinder, producer, and Vaughn Taylor, director, will be released for sale on September 25th. Distributed by Lionsgate Home Entertainment on DVD, the movie will be available on Amazon and other major media retailers.

Starring Tom Lagleder (The Killing Strain, TV’s The Fulfillment of Mary Gray) as Bat Masterson, the movie was filmed at Enchanted Springs Ranch in Boerne, TX, with additional locations in San Antonio and Blanco. Other cast members include Paul Tinder (Frankie and Johnny, TV’s "Knots Landing," Overboard, TV’s "Another World") as Mobius, Scott Jeffries (Machete, The Tree of Life, The Texas Triangle) as Wyatt Earp and Dimitrius Pulido (Machete, TV’s "General Hospital," Enemy of the Mind) as Wagner.

Ronald Epstein of the popular Home Theater forum called the movie a "gritty action-packed western." The storyline follows the life choices of Bat Masterson, hero of the Battle of Adobe Walls, and real-life cowboy from the late 1800s. Interweaving Western legends with documented events, the movie focuses on Bat’s decision of whether to live or to die. In addition to the movie, the DVD contains a behind-the-scenes featurette and a "Composing the Score" featurette.

Any Last Words was given a PG-13 rating from the Motion Picture Association for some Western violence. It is subtitled in English and Spanish and is closed captioned in English. Running time is 90 minutes.

If you would like more information about the release of Any Last Words, or to schedule an interview with Producer Paul Tinder or Director Vaughn Taylor, please call Paul Tinder at (210) 219-0032 or email at ptinder@satx.rr.com. 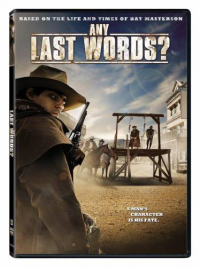