Looking for Trouble? Stephanie K Is Nothing But

Award-winning, fire-starting vocalist and songwriter Stephanie K is currently recording her sultry sound in the studio for her debut album, and her track “Trouble” is set to appear on WiFi PR Group’s upcoming compilation, Indie Anthems Vol. 6.

It would appear that when it comes to musicianship and raw star power, Detroit’s Stephanie K has it all.

Following up her luscious single, “Ice Cream” (2013), Stephanie is currently in the studio recording her hotly anticipated upcoming debut album that fans will be sweating over once it’s dropped. Also in the works is her featured track, “Trouble,” set to appear on WiFi PR Group’s upcoming compilation, Indie Anthems Vol. 6. Both projects are slated to expand and deepen her wild fan base and get her name and music in front of an international audience.

Proud of her wild and quirky personality, Stephanie mixes and matches a slew of genres, such as pop, rock, soul and funk, to create a devilish and delicious sound that holds nothing back and has already garnered several awards, fans, appearances in festivals and big-name venues and opportunities to work with big-name producers. These include four-time Grammy winning producer Michael J. Powell, Trend Def (who have worked with the likes of Lady Gaga, Paris Hilton and Linkin Park) and multi-platinum producer Detail.

To craft this sexy, sensual sound, Stephanie draws influences from fellow girl power pop artists such as Amy Winehouse, Lady Gaga, Madonna and Mariah Carey as well as other infamous star profiles like Green Day, Ray Charles and Prince. In the end, listeners most often compare Stephanie K to Pink, Joss Stone, ZZ Ward, Britney Spears and Demi Lovato, so fans of these artists are in for a sultry surprise.

Some of these awards include first prize in the pop category of the 14th Annual Great American Song Contest for her track, “Story of a Broken Heart,” and Pop Artist of the Year and Pop Song of the Year in 2013 at the 23rd Los Angeles Music Awards. She also swept the pop categories (song, record, artist) at the Indie Music Channel Awards in 2012.

In addition to her forthcoming album, Stephanie K will have her track, “Trouble,” featured on WiFi PR Group’s upcoming compilation, Indie Anthems Vol. 6, a collection of international independent talent that WiFi PR hopes to put on the radar of music lovers and industry tastemakers the world over. Set to be released at Toronto’s NXNE in June, the digital mixtape will be handed out on 3,500 download cards, and 1,500 more download copies will be made available via the Indie Anthems Bandcamp page.

Stephanie has an upcoming performance scheduled on August 15, at Campus Martius in Detroit, Mich. Past performances include numerous venues and national festivals, including the RedGorilla Musicfest at SXSW, the famed Whisky a Go-Go, House of Blues and the Palace of Auburn Hills.

Fans can purchase Stephanie’s music at iTunes, Amazon, Rdio and CD Baby, and they should also watch for Stephanie's music to be featured in numerous film and television projects slated for this fall.

Stephanie has a number of videos available on her YouTube and VEVO channels, including videos for “Twisted,” which amassed more than 141,000 views in just two weeks, her single “Ice Cream” and her set at the Whisky a Go-Go in Los Angeles. 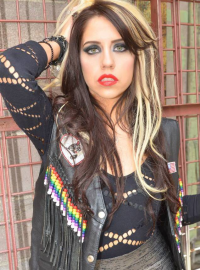