Loris Laker Reaches a Major Milestone in his Music Career

Pune, Maharashtra -- (SBWIRE) -- 12/16/2015 -- Loris Laker; the topnotch musician is pleased to announce the release of his first single titled "hey female". His music is influenced by the 50's and 60's Rock n Roll. Loris is a singer songwriter that defines the new generation Rock n Roll. This newly released single is great for Rock N Roll Dance and the rockabilly of the song is really captivating and inspiring. Loris has been performing since the last six years and has always stated that his career was influenced by Michael Jackson.

His single "hey female" has received rave of positive reviews since its release, many of which sums up the unique blend of music and great talent. James Cobb Music Magazine had this to say after listening to this single "Promising stuff from this new Rock Star, Rock n Roll has a new face". Also, Mr. Dev, Founder of Devs Music Academy, said "Loris gets the crowd on its feet every time he steps on the stage."

This single has some features that make it different from other singles or songs out there.

About Loris Laker
Loris Laker is an Indian born Rock N Roll singer and songwriter. Born on the 29th Aug 1988, his real name is Arijit Bramha. He is a talented Musician and Performer a fresh addition to the Music industry. His music is influenced by music legends like Michael Jackson, Elvis Presley, Beatles and Buddy Holly. 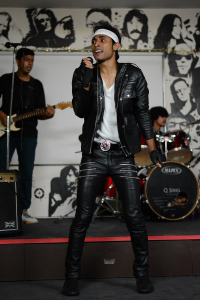