As the first of three books in the ‘Emi Lost & Found’ series, ‘Lost & Found’ takes readers on a whirlwind and highly-relatable journey of romance. With bold themes of friendship, family, love and loss, the series’ first volume is resonating with readers around the world.

Dallas, TX -- (SBWIRE) -- 06/05/2013 -- While thousands of romance series have been cherished by readers for decades, none are perhaps quite as unique as Lori L. Otto’s ‘Emi Lost & Found’. With the series revolving around one captivating woman, two of the three books are narrated by different men who believe her to be their soul mate.

‘Lost & Found’, the series’ first volume, is the beginning of an atypical – yet compelling – romance.

When New York artist Nate Wilson falls in love, he falls hard. The problem is, he’s only been in love once, and the girl of his affections is his best friend, Emi Hennigan. In high school, the two bonded over painful breakups, and swore off a relationship to save their friendship. Thirteen years later, Nate has had more than his share of emotionally-unfulfilling, sexual relationships with beautiful women to distract himself from his true romantic feelings.

When a once-in-a-lifetime opportunity takes Nate away from his friend and his comfortable lifestyle, he is forced to reflect on the distinct void that Emi’s absence leaves in his life. To Nate’s surprise, Emi has a similar experience; but as the friends embark upon their journey toward happiness together, destiny reveals other plans for Emi.

As the author explains, her narratives attempt to pull readers in and tug on their own heartstrings of experience.

“Emi's journey is one of friendship, family, love and loss. Readers experience real feelings from each narrator's point of view, allowing them to be enveloped into Emi's world,” says Otto.

Continuing, “I wanted to write unique contemporary romance that offers something a little different to the norm. The feedback I’m receiving leads me to believe that this mission has been accomplished.”

With over eighty-five Amazon reviews that average an impressive four-stars, this feedback has been overwhelmingly positive.

“This is the first book in a trilogy (I'm currently in the middle of book 2 and I can't put it down) and my favorite thing about it is the characters. The author draws you in and makes these characters so real that I felt like Emi and Nate were close personal friends of mine. I truly cared about what happened to them, would they find true love or not? Very reality based, not just fluff,” says Alexandra Hart, who reviewed the book on Amazon.

Another reader, Amanda, was equally as impressed. She added, “Frustration with Nate and Emi abound through most of this book, but you can't help but love them both. This book takes your breath away in many different ways.”

With two more books to follow (‘Time Stands Still’ and ‘Never Look Back’) Emi and her heart have many more escapades to share.

About the Author: Lori Otto
After graduating from the University of Texas at Arlington in 1997 with a Bachelor’s Degree in Communications, Lori Otto worked in the billboard industry for ten years. Frustrated with trying to communicate entire messages in “seven seconds or less,” she decided to leave outdoor advertising and return to her love of creative writing. 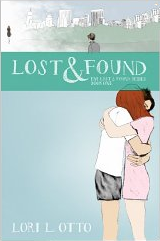