Reminiscent of the works of Kurt Vonnegut, this razor-sharp debut novel from Jay Begler combines the domination of the Internet with the power of the media to form an environment where social hierarchy depends solely on a person’s “rating”.

San Francisco, CA -- (SBWIRE) -- 04/16/2014 -- In Jay Begler’s dazzlingly clever novel, ‘Love in the Time of Apps’, a mega-company, Pragat Corporation, develops a web-based Zagat-like rating system for individuals using personal the data they’ve mined from, the web and other, more mysterious sources. Everyone in the country is “Pragat Rated.” Oprah? She’s a 29. Madoff? Well, no surprise there: he’s a two.

Every individual in the United States becomes the sum total of his or her rating, and despite waves of public resistance, the idea becomes inescapable. The slogan, “You are what you rate,” soon becomes a truism. Those who enjoy a rating of 25 or above find their lives a blessing – everything comes easily to them, and barring any unforeseen circumstances, their success is assured. For anyone assigned a rating of 10 or below, life is a little different…

Following the journey of Philip Goodwin, a well-liked businessman who falls from a rating of 28 to one of zero, the novel takes readers through the minefield of a society where a web-rating can mean life in a palace… or in a ghetto.

At times funny, sardonic and sometimes “Kafkaesque,” ‘Love in the Time of Apps’ is a blaring warning to those who put their lives on the Internet without thinking twice.

“As he passed a newsstand, Philip Goodwin saw his photograph on the cover of People magazine’s newest publication, Unpopular People magazine. A banner across the photo proclaimed, “The Most Unpopular Man In America.” Given his present circumstances, Goodwin believed that the tag was accurate.”

Romance, media influence, and the consequences of celebrity all intersect in Jay Begler’s digital-age satirical debut novel, Love in the Time of Apps

A Zagat-like numerical rating system becomes the sole yardstick by which individuals are judged. The ratings soon lead to a new social hierarchy based exclusively upon a person’s rating.

Philip Goodwin is living the good life until a series of incredible events cause his rating to plummet from stellar to abysmal. Ultimately relegated to a ghetto for people with ultralow ratings, Goodwin must fight back against the forces that have savaged his reputation.

In the vein of Kurt Vonnegut, with a dash of Woody Allen, Love in the Time of Apps is a witty, satirical glimpse into a media and internet obsessed society in the digital age. Its insightful musings will have readers thinking—and laughing—long after the last page.

In the short time since its release, ‘Love in the Time of Apps’ has earned a five-star rating on Amazon and rave reviews.

Calling the book “hilarious and thought-provoking!” Tom Hackett wrote: “Jay Begler's debut novel is an extremely witty look at just how far we've come in the age of social media. I found myself laughing out loud on every page and then reflecting on the deeper, darker message hidden within. One that stays with you, well past the final pages. Satire is not always the easiest genre to pull off, but Mr. Begler does so in an accessible way. I highly recommend this to any fans of Vonnegut or Steve Martin.”

For Begler, the novel is his examination of the current state of society in the United States, with the government accused of spying on its citizens and Americans glued to their Smart Phones.

“I wondered, what are the inherent dangers of private companies or the NSA collecting all of our personal data?” says the author. “Certainly, this intrusion is an invasion of privacy. But, does this practice have a more ominous potential? My novel, a timely digital age satire, suggests that used in the wrong way our personal data can not only become a tool for creating a new form of discrimination, but, in the wrong hands, for oppression.”

‘Love in the Time of Apps’ is available now: http://amzn.to/1eEJ2MO

About Jay Begler
Jay Begler has authored many non-fiction articles, but Love in the Time of Apps is his first full length novel. He currently lives with his wife, Linda, in San Francisco and is working on his second novel. 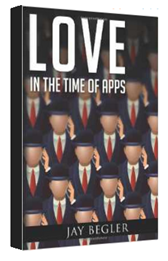