New York, NY -- (SBWIRE) -- 02/03/2015 -- According to scientific theory, a person's life is influenced by what are termed rhythmic biological cycles that affect their ability in various domains - mental, physical and emotional activity. What if a person could have their biorhythms with them at all times, as close as their mobile device? The power to act and make decisions when they were under peak influence could make one more productive.

Mark Twain said that "by the Law of Periodical Repetition, everything which has happened once must happen again and again -- and not capriciously, but at regular periods, and each thing in its own period, not another's, and each obeying its own law."

Acting on that premise, Looptastic is available just in time for Valentine's Day, measuring the personal love index which can help to decide exactly how to spend the day with a special someone. The app instantly tracks emotional cycles in order to help to identify partners who are in the right kind of mood.

When it comes to biorhythms, each cycle has a unique period. The interaction of these cycles varies. For instance, the physical cycle lasts 23 days while the intellectual lasts 33 days. All cycles start at a zero value. All cycles begin on the day of one's birth in the positive part of the cycle. At the half way point through the cycle the waves again cross zero and move into the negative part of the cycle like a wave pattern. With Looptastic, users have never had an easier time measuring their physical, emotional, intellectual, intuition, spiritual, and aesthetic cycles.

The Looptastic app has an attractive UI which will allow users to customize background colors. They can also share screenshots of biorhythms and share with friends and the world through Twitter, Facebook, and other social media platforms. Users have the ability to setup a daily alarm which will help inform them about the day's rhythms.

Looptastic gives users the ability to check the biorhythm chart everywhere at their mobile phones and easily keep a close eye on life cycles, which impacts activity, endurance, level of immunity, cognitive abilities.

About Looptastic Studios
Looptastic Studios is an independent app development studio based in New York. Founded in 2007 and launched in 2009, Looptastic Studios offers mobile applications and solutions that are designed to challenge cognitive abilities. As a recognized leader in mobile consumer services for the last years, Looptastic's mobile experts have been at the forefront of mobile innovation.

To learn more about Looptastic and to download the app now for Apple iOS and Google Android, visit www.looptastic.com. 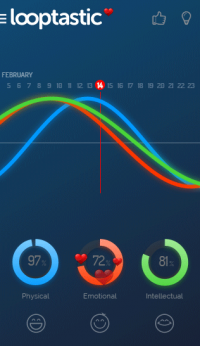