Magician Tom London Sets the World on Storm with His Performance for Disney, Oz, "the Great and Powerful"

Professional Entertainer and Magician Tom London recently performed at the Westfield shopping centre in Shepherd’s Bush and Stratford as Oz. His spectacular show “The Great And Powerful” enthralled the spectators and established him as one of the biggest entertainers of the present era.

London, England -- (SBWIRE) -- 04/24/2013 -- Tom London is a well-known name in the entertainment industry and his latest magical performance for Disney, Oz showcases his great expertise in engaging audience and offering them a good quality family entertainment. His performance at the Westfield shopping centre in Shepherd’s Bush and Stratford, titled as The Great And Powerful presented an aura of fun-filled spectacular show that people will remember throughout their lives. The occasion was the promotion of the upcoming release of the film by Disney, and Tom was the magician for hire, who had been entrusted with the task of promoting the film by drawing the attention of the audience with his unexpected magical tricks.

One of the Disney officials maintained that the event was a great success and that Tom had a great contribution in making the event more joyful and eventful. He acclaims, “Tom did a wonderful job. His magic was an exciting presentation that kept the audience enjoyed. He deserves the appreciation for being one of the best magicians for hire for Disney. The way he walked close to the audience and interacted in a one-to-one manner was really appreciable.”

Tom also exalts, “For me, it was a great experience for performing for Disney. Dressed in a Victorian costume and interacting with the audience, who came there to watch the film was a new experience for me. But I loved performing for them and surprising them with my magic tricks. They loved my tricks. There are hundreds of pictures that were clicked during the event, and very soon I will publish them online on my site.”

Disney engaged Tom as their magician hire, and Tom reached the venue at noon to spell his magical charms over everyone who came there to watch the film. Tom met and interacted with each of the audiences and performed the tricks that enthralled everyone, whether young, old or a just a small child. It was a fun time for everyone, parents with their children, or young people with their partners or spouse. To learn more about this magician for hire, one can visit his personal website http://www.tomlondonmagic.com .

About Tom London
Tom London is a talented magician who has been performing as a Table Magician, Wedding Magician, Corporate Magician, Party Magician and a close up magician for the last several years. He has performed all over the world for high-profile clients and celebrities. Tom is often found performing close up magic, exhibiting his sleight of hand magic at private parties, corporate events, weddings, and birthday parties. 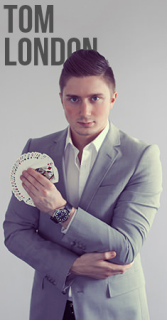