Did you know that corruption is a very high conflict stimulant and is practiced in Churches as well? To eliminate it, there is strategic need to combine the religious efforts of the Church and the circular policies of the State in the legendary anti-corruption battle.

Within the working document titled, THE CHURCH AND STATE ON CORRUPTION, the CEO, Dr. Kelly NGYAH previews some direct and objective briefs about the religious (Church) and Circular (Polis) discuss on corruption and how both conceptual frameworks are achieved within both approaches.

In Abstract, the document establishes the historical conception of the Church and the State together in a relationship in combating the most evil/or human degradation phenomenon of corruption within separatist agendas, but, 'how can this be achieved when political philosophies duly deny the Unitarian focus of both institutions while extremist religious theology forbids the missionary similitude between both establishments'? NGYAH puzzled!

In the attempt to illuminate the practical direction of positive change between both establishments, the document brings up the notion of obligatory responsibility bestowed upon the Church and the State as partners to eradicate corruption ills, both from religious and circular perspectives.

It follows that, as a religious body, the notion of corruption is observed as ‘sin’ from church based views, while as a circular concept; it is viewed as an egoistic and societal degenerative ill. Thus, to distinguish and probably unite the efforts of both establishments against corruption, the literature throws direct light upon the conceptive values that would instigate both liberal and religious citizenships towards a similar goal of eliminating corrupt practices.

Within abstract but practical assessment positions, this unique brief piece of both esteemed academic and professional value, bridges the ordinary dogma on corruption literature and exposes the corruption phenomenon as a senior and pre-existent institution that was born before the church and the State with a mission to destroy every ethically positive value after it. So, as its mission is seemingly greater, to be handled singly by either the religious (Church) or the circular (State) bodies, will be impossible. However, the document struggles to decongest the relationship between the missionary objectives and positions of the Church and State by emphasizing on the ways and need to combine their efforts and fully dedicated wills in the legendary combat against corruption.

With regards to the continuum of its organizational peace goals, MAHSRA indicates that it is undergoing a series of research works on community conflicts’ intervention schemes and best ways for integrating pragmatic peace policy development and direct peace activity growth within local, national, intergovernmental, and international frameworks. And thus, is highly soliciting support from the public.

To support and/or partner with this organization and still obtain a specialized copy of this document this MAIL option with the following subject should be very useful: Church and State on Corruption Partnership

As a point of note, Supporters of MAHSRA's initiatives are also reminded that, information on partnership as one of the donors of MAHSRA’s Peace and Development works, may be published on the organizational website as it becomes necessary. As such, there is need to confirm in writing to MAHSRA, if a supporter's name should be included and/or published within the organization’s funders’ bulletin.

The attached document provides additional details (THE CHURCH & STATE ON CORRUPTION) on the right angle bottom of this page (RELATED FILES).

MAHSRA BLOGS presents you with more major titles and publications.

The Discussion Forum for this piece is spotted at: MAHSRA FORUMS: 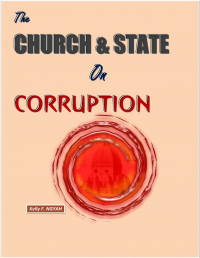