MAHSRA Releases an Analytical Projection on Indigenous Peoples and Politics

A Global Analysis on Indigenous Peoples and Politics

Bamenda, Cameroon -- (SBWIRE) -- 05/08/2014 -- With regards to the upcoming Sessions of the UN Permanent Forum on Indigenous Issues, the Modern Advocacy Humanitarian Social and Rehabilitation Association (MAHSRA) an International NGO based in Bamenda - Cameroon, and in Consultative Status with the United Nations’ Economic and Social Council (ECOSOC), introduces an analytical perception of indigenous peoples and politics across the globe.

Recaptured in over 325pages and 95,130words multicoloured research document, the current acting Chief Executive Officer of MAHSRA explained that the goal was unite and analyse the global indigenous peoples’ worries and needs in contrast to global governance policy reach within the specific indigenous/ethnic or tribal communities.

In the words of the CEO, Dr. NGYAH highlights that, ‘in line to contribute to the UN indigenous peoples’ development issues, because of the countless cultural diversification and contradictory textual appreciation of indigenous issues around the globe, I saw the need to make it all accessible within a single document. Within this, everyone across the globe should be able to obtain knowledge on indigenous worries in their communities and those of others, and as well, possibly know what national and global policy positions are in particular regards’.

While the document exhumes the anthropological perspectives of Indigeneity through the human rights based contexts of tribal peoples as given in the ILO Indigenous and Tribal Peoples Convention, 1989 (No. 169), it has calved out the world’s indigenous peoples within measurable regional regrouping dimensions, after which, it communicates the indigenous ethical contrasting and synonymy politics within the targeted national and regional zones.

Because of global inconsistencies in regards to indigenous peoples' positions, an exclusive representation or inclusiveness overview has been carried out to ensure that the indigenous and/or ethnic minority peoples’ Politico-Legal situations in over 14 zones including: South America, Russia as of whole, Central, East and South Asia, Middle East, North America, the Arctic region, Australia, Eastern, Central, Northern, Southern, and Western Africa, should be able to direct the zonal care politics for indigenous peoples. As generalizations have often failed to address the zonal worries indigenous peoples, MAHSRA has now used an inclusive focus on over 400 indigenous peoples across over 71 countries as a means to provide the needed community focus in redressing indigeneity problems.

Mindful of the global policy laxity to indigenous community specificities, MAHSRA's orientated approach on indigenous worries’ and needs’ juxtapositions across world regions and countries, develops a cross-regional and national indigenous synonymy socio-political framework based on cultural inconsistencies. As such, it further proposes a self-determinism and politics of identification amendment text for article 33 of the United Nation’s Declaration on the Rights of Indigenous Peoples.

Rhetorically, MAHSRA's study has been presented via three orientated principal parts which include:

Some have analysts have been very critical about this work, but in conclusion, it is accepted that, it was time for both academicians and professionals to follow this exemplary dimension and further facilitate the works of the UN in policy development and the well-being of all peoples.

Currently, MAHSRA is undergoing a series of remote indigenous community development initiatives including: construction of schools, agricultural entrepreneurship trainings, land and territorial rights based advocacy, widowhood rites to rights etc.
They are requesting the people's support and/or partnership.

The Organization indicates to give out specialize copies of this document to the supporters of their indigenous community development activities via: MAIL

Subject of mail should be: Indigenous Partnership

Supporters of MAHSRA's initiatives are also informed that, information on partnership as one of the donors of MAHSRA’s Peace and Development works, may published on the organizational website as it becomes necessary. As such, there is need to confirm in writing to MAHSRA, if a supporter's name should be included and/or published within the organization’s funders’ bulletin.

As well, for additional details, see the Pdf attachment file [INDIGENOUS PEOPLES AND POLITICS Briefs] on the right angle bottom of this page of the RELATED FILES. 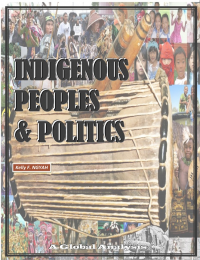