B.W. Prescott turned his life around—so can anyone else! Reviewers call ‘Managing Your Inner A**hole’ a “brutally honest journey from tragedy to triumph.” As the son of a wildly dysfunctional family, Prescott faced addiction, betrayal, and his own fears. He chronicles his missteps that led to a death spiral, and details a surreal ‘Road to Damascus’ intervention that saved his life and put him on a path to success. Prescott walks readers down that path by using his own failures in a series of short case studies. After a few of these ‘life lessons’ strike uncomfortably close to home, many say they realized, "Prescott isn’t talking about himself... He's holding a mirror up for me!” Prescott’s recovery can be anyone's. He’s mapped a way out… and it’s a path a lot of people will want to follow.

Orange County, CA -- (SBWIRE) -- 09/09/2014 -- As a young man Ben Prescott thought himself a victim. He was mad at the world, and he used that rage as an excuse to destroy himself and eviscerate anyone who crossed him. That changed the day Prescott hit rock bottom and God showed up in his living room. After what he jokingly describes as “one very weird wake-up call,” Prescott realized that he was his own worst enemy and he needed to change. As Prescott puts it, “I was given a second chance. I didn’t want blow it!” When asked why he wrote a book about his experiences 30 years later he says, “It took me a long time to talk about these events, but I slowly realized that if I didn’t acknowledge what happened to me, no one else could learn from it. And I didn’t want to waste all that pain.”

Since its release, the book has garnered a string of rave reviews earning the coveted five-star rating from Reader’s Favorite and currently holding an overall 4.5 rating on Amazon. Jenna Gossett comments, “This was really an enjoyable read! It contains some great life lessons that a lot of people could use. Prescott was able to honestly put down in words …what most people never want to relive or admit to …this is a painfully honest book that most people could relate to.”

Dr. Travis Fox adds, “We all have one! Everyone who reads this (book) will understand and relate to it. Written in easy to understand true to life language … it hits the mark! Everyone needs a copy of this book because the only people it won’t help are dead!!!”

Charity Blassingame says, “…Prescott has taken on this subject and written about it in a way that has not been done before, it sat me back on my heels….”

Theodocia McLean of Cold Coffee Press writes, “B. W. Prescott is a master of reflecting his intellect, love, and deep passion for helping others that shines through in a way that makes you stop and ponder where you are, where you are going, and where will you end up. Once this book is in your hands, it will be impossible to put down."

‘Managing Your Inner A**hole: An Unusual Education in the Fundamentals of Emotional Intelligence’, published by Second Blessing Media, is available now at: http://amzn.to/1pq7VDd

There's never been a more perfect gift for that “special” someone on the list.

About Ben Prescott
Ben Prescott is a serial entrepreneur who has been part of the executive teams of three successful tech companies. He currently advises CEO’s and other entrepreneurs as a Director of a technology accelerator. Since 2002 he has volunteered with schools, the National Alliance on Mental Illness, Boy Scouts of America, and Big Brothers Big Sisters across the Southwest. He lives in Southern California and has been married to Claire, the girl next door, for 28 years. She’s an educator and parent coach. 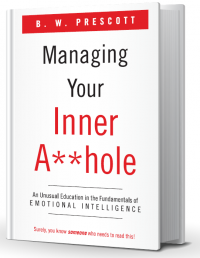